You are at:Home»Current in Fishers»Internet of Things lab announced for Fishers

The Indiana IoT Lab-Fishers is expected to open this summer. (Submitted rendering)

Indiana comes from a strong history of making things, growing things and moving things. At least that’s what Fishers Mayor Scott Fadness established in an innovation announcement for the City of Fishers Feb. 21. So, he said, there’s no reason Indiana shouldn’t be at the forefront of the Internet of Things by establishing the first IoT Lab in Indiana and possibly the Midwest. 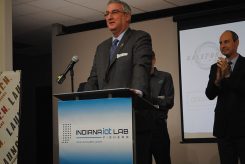 Gov. Eric Holcomb speaks at the announcement of the Indiana IoT Lab-Fishers. (Photo by Anna Skinner)

The Internet of Things is the application of internet to various devices. Fadness provided the anecdote of when he was younger, he was a farm boy who drove a tractor. Now, there are tractors that drive themselves.

“We fear complacency over failure every single day,” Fadness said. “We want to continue taking giant steps forward to not only drive our community toward sustainability but the state of Indiana.”

Gov. Eric Holcomb spoke at the announcement, saying he was “flat-out energized and stoked to be in Fishers once again.”

“Indiana’s economy is built on our proven ability to grow things, make things and move things. Looking ahead, we also want our state to be known as a place for creativity and innovation,” Holcomb said. “To maintain our position as a leader in the new economy, IoT must be part of our strategy for the next generation of Hoosiers, and I commend all those who worked to make bring this high-tech facility to Fishers.”

John Wechsler, founder of Launch Fishers, and John McDonald, CEO of ClearObject which was formerly known as CloudOne, also spoke.

The IoT lab would be approximately 24,000 square feet and offer space for meetings, ideation and a makerspace.

“We want you to explore self-driving vehicles all the way to internet-connected crockpots,” Wechsler said. “Anything you can dream up that can be internet connected, we want to be able to provide that.”

Mcdonald said ClearOne is growing its workforce with the IoT lab, and it will increase its Indiana employee base by 15 percent this year by opening a space in the lab.

The Indiana IoT Lab-Fishers is scheduled to open this summer at 9059 Technology Dr.