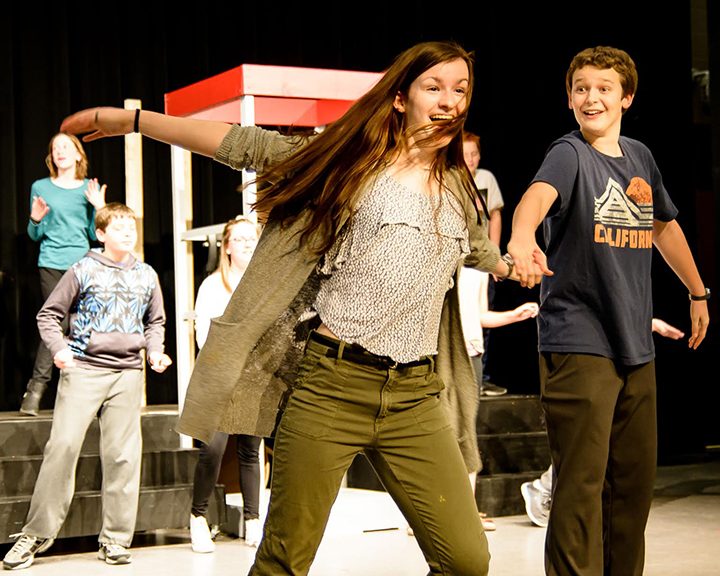 Emily Doehring (left) as Kim McAfee and Pate Jessop (right) as Conrad Birdie rehearse “A Lot Of Livin’ To Do” along with other members of the cast of “Bye, Bye, Birdie” at Zionsville West Middle School. (Photo by Roger Manning)

The 1950s musical inspired by Elvis being drafted in the army is coming to Zionsville West Middle school.

“Bye Bye Birdie” is a departure from the previous two Zionsville West shows of fanciful fiction from Dr. Suess and Shrek.

“I wanted to do a show that depicted a specific era, something that was grounded in real life,” said director Lynne Manning, who has directed six other middle school productions. “It’s been fun to talk about why this is important, what does this mean.”

With a cast and crew of 65 middle schoolers, the abbreviated version of the Broadway musical runs an hour long with some of the original storylines and songs omitted or altered to be appropriate for a younger audience.

“I think there are interesting parallels with hero worship and the celebrities people adore,” Manning said. “I think it’s fun for the kids to see the hero worship that we do in a different light.”

Eighth grader Emily Doehring plays teenaged Kim, a die-hard fan of singer Conrad Birdie, but said that she isn’t as “fan-girly” as her character.

Doehring was a tree in her first middle school production but feels that helped ground her with performing.

“It was a really humbling experience for me and it helped me grow as an actress more,” she said.

This is the second production for Benjamin Weber, who portrays Birdie’s manager Albert Petersen. The eighth grader said that he enjoyed the musical taking place during an actual time period and did some research to understand song lyrics such as in “Kids.”