You are at:Home»Current in Fishers»Switching gears: Harley Davidson shop to break ground in Fishers 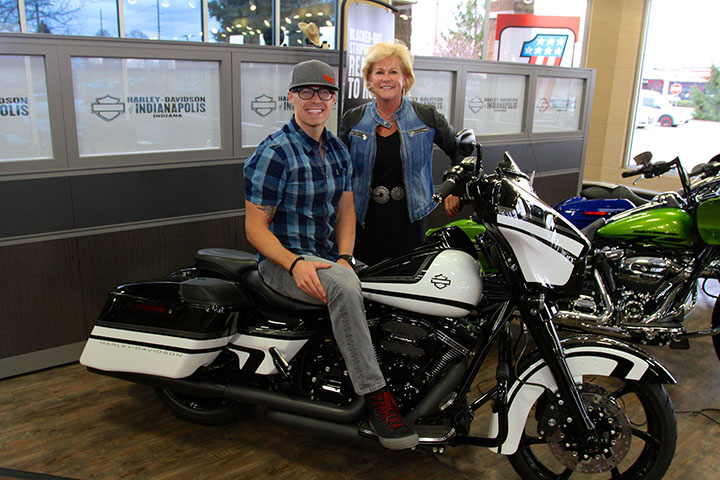 Mother and son duo Donna and David Dellen co-own the Harley Davidson of Indianapolis dealership that will break ground in Fishers in March. (Photo by Sadie Hunter)

For as long as she can remember, Donna Dellen has had a passion for motorcycles. She rode Hondas for awhile before switching to Harleys. Decades later, she and her son, David, are nearing their eighth year of co-owning  the Harley Davidson of Indianapolis. The dealership will celebrate 40 years in March.

The Dellens are switching gears soon, though. Groundbreaking for a new dealership will happen in March near the Reynolds Industrial Park in Fishers. Construction will  continue through  summer, with plans to open in the winter. The current shop will close when the new one opens. 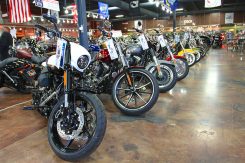 Harley Davidson of indianapolis offers more than 100 motorcycles ranging from $6,000 to $50,000. (Photo by Sadie Hunter)

Presently, the dealership doesn’t have indoor storage for bikes requiring service, and the Dellens said sometimes that makes customers uncomfortable. At the new shop, service will be completed indoors.

“We think Fishers’ growth is amazing,” Donna said. “They are a very up-and-coming area. Our proximity to the interstate is helpful, so we will be accessible. I think they’re more the age group that we go for, more into the direction of 45 to 65. Mostly, people ride in college, then have kids, and they quit anything related to motorcycles. Then when the youngest one goes off to college, it’s their time again. This is a sport they go back to.”

Donna said the majority of motorcycle riders are men, but the business has seen an increase in female riders. The Dellens are trying to attract more women to motorcyles. Part of that effort includes having females on staff.

“We are trying to increase that number. We have a female salesperson, and not many dealerships have female (gear),” Donna said.

The Dellens sell female clothing and protective gear and other items, such as Harley Davidson-themed wine glasses.

Another way to attract new riders is throught the motorcyle class David offers at the end of April through October at Sand Creek Elementary School. The classes are certified by the Motorcycle Safety Foundation. Some classes are women-specific.

“It’s a great program. I even encourage people who already know how to ride to take it because it’s a reminder of how to ride safely,” David said.

“The theory is anybody can learn how to ride,” Donna said. “It’s a very safe class. David went through different types of training.”

Participants go to the Bureau of Motor Vehicles after the class to get their motorcycle license. Classes are $300. For more, visit hdofindy.com/learn2ride.

As far as moving to Fishers, the Dellens said the city has been very welcoming.

Fishers Mayor Scott Fadness is on the list of welcoming city officials.

“The Dellons have a tremendous vision for what they want to create. We’re really excited for a unique retailer on the (Ind.) 37 corridor,” Fadness said. “Having them anchor that area will spur additional development that, along with significant, upgraded infrastructure along the (Ind.) 37 corridor, I think it will make that very viable for years to come.” 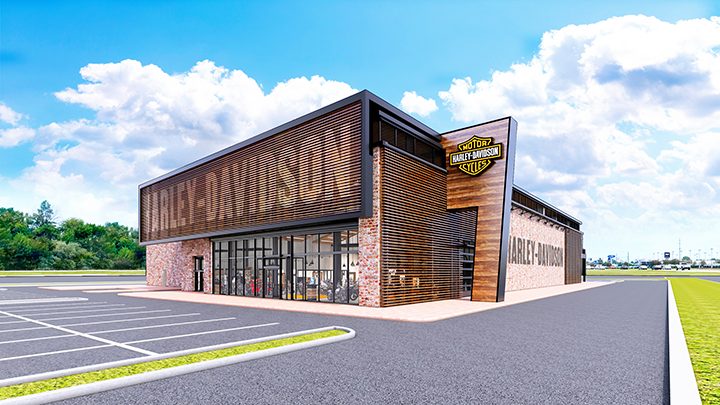 The new Harley Davidson dealership in Fishers will be nearly double the size of the current building. (Submitted rendering)

Prior to Donna and David Dellen owning the Harley Davidson of Indianapolis dealership, Donna’s husband Ross owned the business. When he died eight years ago, mother and son took over co-ownership.

“In the beginning, it was frightening,” Donna said. “I certainly grew up in (the motorcycle industry), married to it for 30 years and knew it by association, but owning and running a business was very scary. We learned as we went, and now it’s very comfortable because we are doing so well, and we are growing so much that it makes it fun. Working with (David) is somedays difficult and somedays wonderful. We go from strong business discussions to family discussions in the same two minutes.”