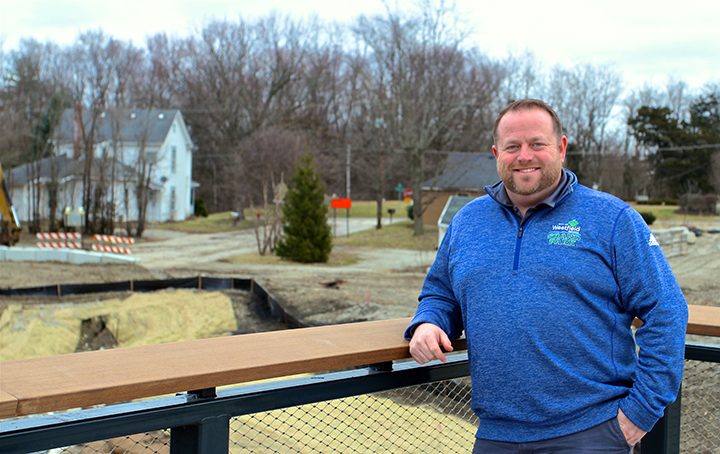 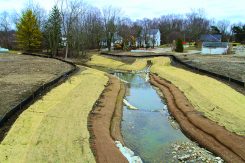 An example of the j-hooks. (Photo by Sadie Hunter)

Westfield residents now have a visual aid that portrays the true image of Grand Junction Plaza. Nestled under the new Mill Street expansion, Indiana limestone flanks cement walkways – an example of architectural materials that will soon encompass the entire park.

Three j-hooks, erosion control measures when coupled with the Mill Street expansion laid the foundation of the $25 million plaza, have recently been completed.

“It’s an erosion control measure that slows down velocity,” Public Works Director Jeremy Lollar said of the j-hooks. “It’s open underneath, and there’s a walkway that’s down there that will extend up into the park. This walkway is in place and enters into the park.”

With the now free-flowing Mill Street, Lollar said traffic has improved. The street expansion connects Union Street to Ind. 32. Park Street access is no longer available from Union Street. For aesthetics, hand rails and outlooks have been placed along the Mill Street bridge that will provide a panoramic view of the park. Lollar said that other than some landscaping work along Mill Street to be completed in the spring, the first phase of the project is virtually complete.

A rendering of the completed riparian corridor. (Submitted image)

Next steps for the Public Works Dept. will continue this year, with the beginning of the riparian corridor, which widens the creek’s footprint for aesthetics and erosion control.

“Our next step is planned for this year, which is the stream work,” Lollar said. “Right now, these three j-hooks were installed with Mill Street, but we will take them the rest of the way through. We haven’t finished the design, but they will be more of the same. It widens the footprint of the creek as well, which is the flood control aspect of it.”

The Mill Street projects and the riparian corridor are funded through the Public Works budget, with a cost of just more than $3 million. All park structures, such as the amphitheater, the ice rink, the trailhead pavilion, the two playground structures and the café, will be included in the $25 million cost the city is evaluating how to fund.

Although construction and pedestrian bridges won’t begin until next year, residents can get a taste of the park’s aesthetic by admiring the limestone walls beneath Mill Street. Limestone will be used throughout the park, a nod to Indiana’s natural and abundant material.

“The park design is one of the central focuses of Indiana, which was Indiana limestone,” Lollar said. “That’s why we incorporated it throughout the park. That aspect of the j-hooks is because of Grand Junction and our concept there. Truly, limestone is readily available. It’s cheap here because we have lots of it, there’s ease of access, and it looks nice. It’s a cost-effective, aesthetic measure.”

Although the Public Works Dept. project funding comes from the utility sale in March 2014, the city is still attempting to determine a way to fund the rest of the plaza.

“Grand Junction will be the jewel of Westfield once it is complete. However, it will be a long process because we are strategically planning our funding of the entire project very carefully,” Mayor Andy Cook stated in an email to Current. “While the first two phases have allocated dollars through Public Works, the final phase has not been determined. The (Westfield) City Council and the administration will take their time to figure out the right way to finance Grand Junction, but they believe in the process and the project enough that Grand Junction has already begun with the first two phases.” 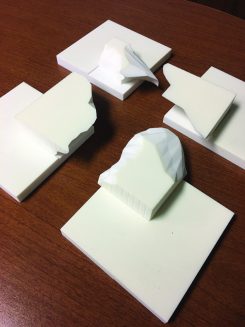 The Jeffersonian Grid is an architectural concept used to design the five structures in Grand Junction Park and Plaza. (Submitted photos)

Based on a Jeffersonian Grid 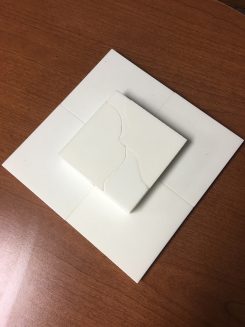 The Jeffersonian Grid is an architectural concept used to design the five structures in Grand Junction Park and Plaza. (Submitted photos)

The four structures spread throughout Grand Junction Park and Plaza will feature translucent glass and jagged, pixelated limestone. The design for the structures is based on the Jeffersonian Grid, an architectural method popular in Indiana.

Placed together, the structures create a smooth block.

“We wanted to incorporate that Indiana limestone, and the idea of this concept is it is this cube, and the buildings are blown apart and broken out into (four separate) pieces,” Public Works Director Jeremy Lollar said.

The structures include the amphitheater, the trailhead pavilion, the café, the skating rental and two playground structures, which were originally planned as a restaurant.

“We removed (the restaurant) for cost measure as well as incorporate daily use play type stuff,” Lollar said.