You are at:Home»Current in Westfield»Pulte Wood Wind project moves to council with no recommendation from plan commission 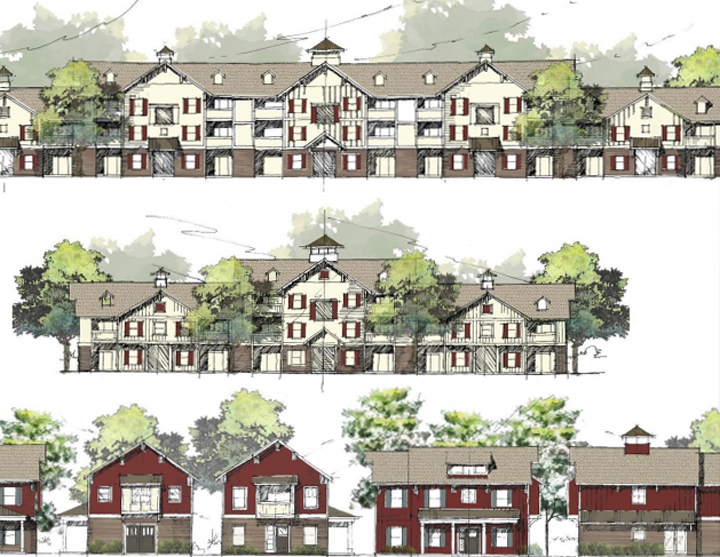 Architectural character exhibits of the multi-family area. The units in the area have been reduced to 224, minimum and maximum square footage has been set, and the ground must be transferred to an apartment developer within three years from the development’s effective date. (Source: westfield.in.gov)

Of the eight advisory plan commission members present at the meeting Feb. 6, the decision of whether to move the Wood Wind Planned Unit Development forward to council with a positive or negative recommendation was split right down the middle.

This was the fifth time Wood Wind appeared before plan commission, including two public hearings. Originally, the plan commission was going to vote to move the development forward to council at its Jan. 20 meeting, but members had enough concerns to delay the vote a few more weeks.

In that time period, the proposal acquired a few changes. The changes were presented at the plan commission Feb. 6 meeting by David Compton, vice president of land acquisition for Pulte Homes Indiana.

Changes included a 50-year deed restriction on Wood Wind Golf Course instead of the original 40-year deed; minimum and maximum square footage requirements for the 224 apartments; the elimination of a gas station, amphitheater or dance club in the commercial area; the determination that Pulte will not cast any votes if the golf course is to be modified; higher architectural standards and more.

Also, three years after the PUD goes into effect, if the apartment ground has not been transferred to an apartment developer not related to the seller, the ability to develop multi-family units in the development goes away and the multi-family area becomes a flex area for either commercial or residential.

Presented at the Jan. 20 plan commission meeting, Compton told members that 69 of the development’s homes are required to be custom homes not built by Pulte. That number remained the same. Density also was decreased from 1.57 units to 1.38 units per acre.

“Thank you for all that have been involved in the substantial changes that have been made since the original filing,” Compton said. “Not everyone in this room may always agree, but this project has 78 of the 85 criteria in the 2007 comprehensive plan. Those not embodied in the plan were considered subjective.”

Member Bob Smith was absent, but sent a public letter expressing his concern. If he had been present, Smith also would’ve voted no, which would have forwarded the proposal to council with a negative representation.