You are at:Home»Current in Carmel»Carmel Community»CCS supt: 260 jobs at stake without new referendum

This chart shows where the 260 job cuts are expected to be made throughout CCS if a new referendum is not passed. Source: CCS

A referendum supporting Carmel Clay Schools is set to expire at the end of the year, and the district’s superintendent outlined at the Jan. 23 school board meeting why he believes it’s crucial for voters to approve a new one. 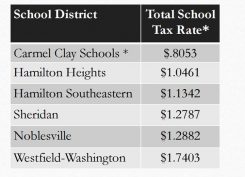 If the referendum passes, CCS will still have the lowest school tax rates in Hamilton County. Source: CCS

If a new referendum is not approved, Supt. Dr. Nicholas Wahl said that CCS will be forced to cut 260 employees and reduce classroom and extracurricular offerings.

Voters approved a $14.5 million referendum in 2010 that increased school taxes by 16 cents per $100 of assessed property value. Wahl asked the school board to consider raising that amount to 19 cents in the proposed referendum, but he said property tax rates will remain stable at 83 cents as the district is expecting a 3 cent reduction in its debt service rate.

“As we try to educate those who are making decisions about their children’s education, we’re looking to maintain what we do,” Wahl said. “Simply put, we’re looking to continue to do what we do best: high quality academic and extracurricular programs for the 16,000 students in Carmel Clay Schools.”

Through the state formula, CCS is the second-lowest funded district per pupil. It receives $786 less per student than the average school district in Indiana. Only Zionsville receives less.

If the referendum is approved by voters and the school tax rate remains at 83 cents, Wahl said that CCS will still have the lowest school tax rate in Hamilton County by far.

The school board will consider a resolution at its Feb. 13 meeting that would set a referendum election for May 2. Learn more about the proposed referendum at http://www1.ccs.k12.in.us/district/2017referendum.