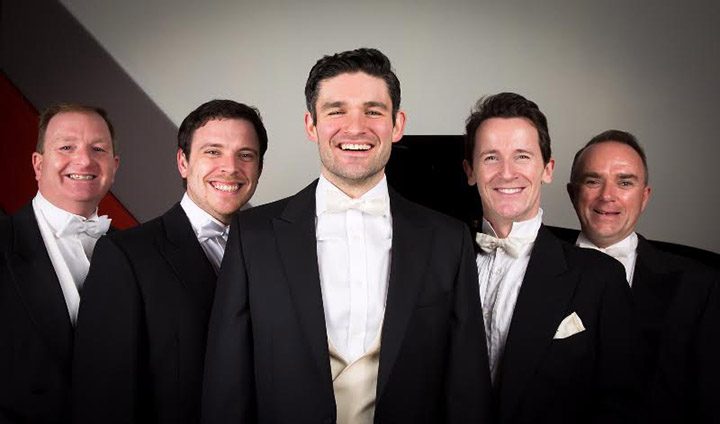 The Five Irish Tenors have been preparing for the past two years to get their songs just right for the first North American tour.

“The audiences have been receptive to our performances so far,” Hutton said. “It’s such a great energy and we really feed off that. Thank God, we all get along really well, which is always a bonus.”

The Five Irish Tenors, who began the tour in January, will perform at the Palladium in Carmel at 8 p.m. Feb. 4.

“In our audience there will be people with Irish heritage or backgrounds who want to hear a little of that so we will sing some Irish classics,” Ciaran Kelly said. “We’ll bring some of own favorites like pop music so songs by Billy Joel and artists such as that. Everything has been arranged for this by our musical director Danny Forde.”

The other tenors are Morgan Crowley, Alan Leech and David Martin.

“Ireland is a small place and the music world is even smaller, so we all worked together or sung together in different aspects, maybe shows,” Kelly said. “We got together and five is good number for the harmony. We get along well musically. We’re all from different backgrounds. George has a very rich traditional music background. Morgan is more into the musical theatre. So we bring different ideas and backgrounds to it which helps to shape the program and shape the show.”

Hutton said the blend is special.

“Ciaran has a rich classical voice but also can also really add his voice well to the pop songs as well,” Hutton said. “Danny Forde has arranged some beautiful pieces. They have some rich and ringing harmonies in them. I’ve spoken to the audiences after some of the concerts and one of the aspects they’ve really enjoyed have been the harmonies. One of the pieces that really rings out is ‘Bridge over Troubled Water.’ There are some really nice harmonies in that. The more traditional pieces like ’Too-Ra-Loo-Ra-Loo-Ral’ is lovely and full of very nice harmonies. There are many different vocal arrangements of the pieces and they all lend themselves well to the program.”