You are at:Home»Current in Zionsville»To the rescue: Mayor plunges into frozen pond to help ZFD train on ice 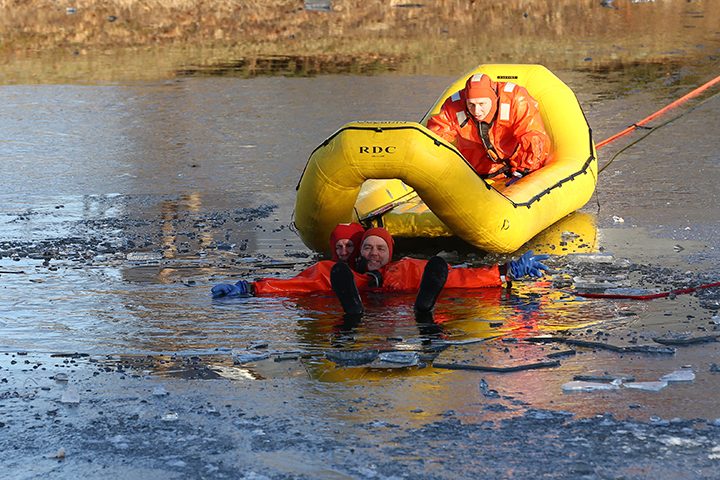 The Zionsville Fire Dept. rescued Mayor Tim Haak from an icy retention pond – several times – Dec. 28 after he slipped into the freezing water.

It was all planned, of course.

Haak volunteered to act as a victim as ZFD completed its annual ice rescue training in the retention pond in the Village Walk neighborhood. The experience wasn’t quite what he was expecting.

“It wasn’t as cold as I thought, but it was a little unnerving crawling out there for the first time, hearing the ice crack around you,” he said. 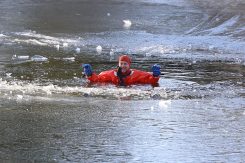 Mayor Tim Haak waves to his family as he floats in an icy pond.
 

“This is one of those things we don’t do on a very regular basis, so it’s important for us to make sure that we’re proficient with skills,” he said.

This winter the police department has responded to reports of children playing on ice, but fortunately ZFD has not had to attempt a rescue.

“It’s good that people recognize there is a danger there and they make the phone calls to try to remove that danger,” Beam said. “That’s very helpful to us.”

Haak wanted to take the plunge into the icy waters last year, but a scheduling conflict prevented it from happening.

He said he enjoys doing training exercises with first responders and other town employees to get a sense of what they go through day to day.

“The more I can experience what our departments go through and our staffs go through, whether it’s police or fire or anybody else, it just helps me understand their jobs better and their needs,” he said.

Beam said the department enjoys training with the mayor and appreciates his willingness to learn about their operations first hand.

“I think it’s great. As he pointed out, it’s very nice for him to be able to know what it is that we go through and what we’re capable of doing,” he said. “It helps him to understand that and what the employees of the town are capable of doing.”

In early 2016, Haak completed Fire Ops 101, a program organized by the International Association of Firefighters Local 4416 that gives public officials the chance to experience a day in the life of a firefighter. The scenarios include vehicle extractions, medical emergencies and several minutes in a flashover chamber in extreme heat.

Haak said participating in the ice rescue was the most unsettling experience.

“You just never know what’s going to happen with the ice, but I did have the entire staff here as part of the training program,” he said. “I can only imagine what would happen if you actually did fall through and had to wait for 911 and be in the ice fully clothed for five to seven  minutes before they arrived. It would be a little different story.”

A ZFD responder crawled out alongside Haak, offering advice and assistance in case the scenario didn’t go as planned.

“They pulled me right out. I didn’t have to assist them at all,” Haak said. “You can see why they are good at what they do.”

Haak waved to his family as he bobbed in the water, waiting for the rescue team.

“My kids came and watched, and they wanted to jump in as well,” he said. “I have two little boys and they want to do everything dad does.” 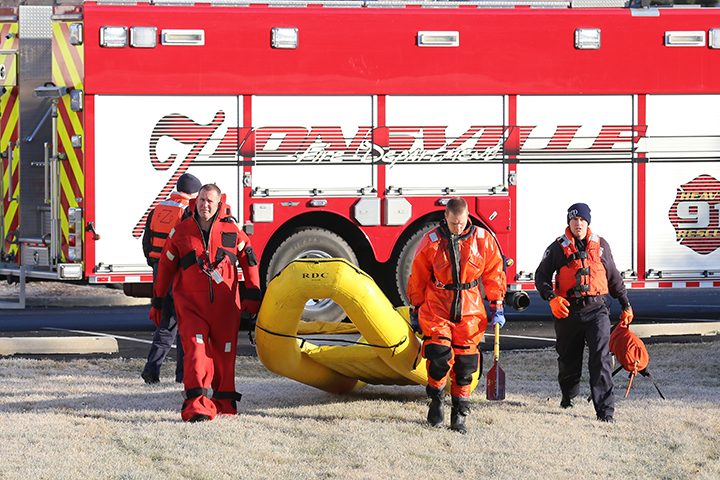 The Zionsville Fire Dept. recommends staying off of frozen bodies of water and visiting a commercial venue for ice skating, hockey and other activities. Most homeowners associations prohibit anyone from going out on the ice in neighborhood ponds.

In areas where ice-related activities are allowed, the Indiana Dept. of Natural Resources offers the following tips: