You are at:Home»Current in Fishers»Jack of all trades: Lt. Mike Janes only police officer paramedic in state with equipped vehicle 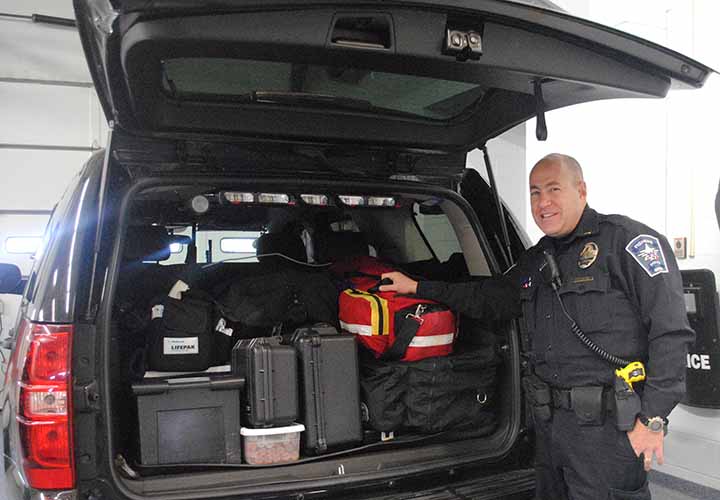 Lt. Mike Janes’ police car is equipped with all the materials necessary for a police officer, diver and paramedic. (Photo by Anna Skinner)

With regard to public safety, Fishers Police Dept. Lt. Mike Janes has done it all. He originally attended college to become a police officer, a path took that took him to his destination. He has served on FPD since 2003. But along the way, Janes also has been a volunteer firefighter, an emergency medical technician and a civilian paramedic.

Now, Janes is the only paramedic police officer in the state of Indiana with a fully equipped vehicle. 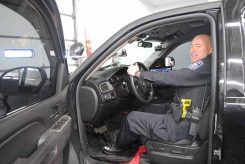 Lt. Mike Janes’ police car is equipped with all the materials necessary for a police officer, diver and paramedic. (Photos by Anna Skinner)

“I went to college with the intent of becoming a police officer, and I studied criminology at (Indiana State University),” he said. “One of my fraternity brothers was a volunteer firefighter,  and he took an EMT class through the university and showed me the book and said, ‘This might help get you hired on (as a police officer).”

Janes then decided to take an EMT class, where the instructor asked him to join the volunteer fire department in west Terre Haute. He went through fire training to become a firefighter and got a job with an ambulance service when he discovered that paramedics earn nearly twice what a new police officer makes. So when he graduated from ISU in 1994, he attended paramedic school for a year and a half and was hired on as a firefighter for the Terre Haute City Fire Dept.

Janes began working as a civilian paramedic for the Fishers Fire Dept. in 2003, when now-FPD Public Information Officer Tom Weger recruited Janes to join the police department instead.

“It was really a great working relationship between our two agencies to outfit my vehicle and allow it to be out on the streets,” Janes said. “Our administration was pretty forward-thinking and made it happen.”

To equip Janes’ police vehicle with  paramedic materieals, such as a Lifepak monitor, an EKG monitor and defibrillators, cost about $15,000. FFD provided all medication for his vehicle. 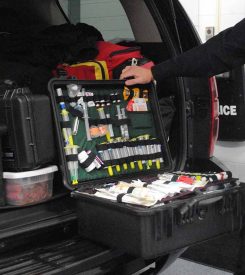 Although Janes cannot transport patients to the hospital in his police vehicle, if he were to arrive first on scene, he would initiate paramedic care. In extreme cases, Janes said he can park his police vehicle and ride in the back of the ambulance transport with the patient.

“I typically work night shift, so there are times I’m out and about when a call comes in, and if I’m close, I arrive prior to the fire department,” he said. “It all depends on circumstances. A lot of times, I’m just another helping hand. They really do have great people over there (at the fire department) and great paramedics. There’re places where fire and police are like oil and water, but we truly have a great working relationship between the two agencies.”

Besides being a paramedic, Janes is on the dive team and serves as boat patrol coordinator. As a paramedic, he can administer flu or other vaccines at the police department, as well as draw blood for those suspected of driving under the influence.

“If (a department) has someone who has knowledge, skills and the abilities of a paramedic working for your agency, and you have the financial ability to provide them with that equipment, then in those cases, you’re just putting one more asset to your community out there,” Janes said.