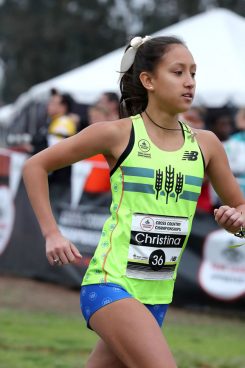 Geisler was one of 40 high school girls to advance to the finals and compete in the prestigious event. She was the only competitor from Indiana.

Geisler took up running in eighth grade following a gymnastics-related injury. She began training for the event in June.

“It was really fun,” Geisler said. “It was filled with a lot of experiences that were just amazing.”

Competing as an individual, Geisler said she missed her Carmel High School cross country teammates and realized how much she relies on them.

“My team has been there with me every step of the way,” Geisler said. “You go and do all of the things and (you realize) how much you miss them and need them.”

Geisler said the hardest part of the race was a downhill section called the Dog Park. She said the ground was comprised of loose dirt and sand and she had difficulty gaining her footing.

“It was interesting adapting,” she said.

Geisler said she enjoyed the experience, meeting new people and believed it was a good way to wrap up her senior season.

“I was hanging out with girls from around the entire U.S.,” Geisler said. “I made some really great friends out there.”

Geisler placed 38th in the 5K competition with a time of 18:37.7. Geisler will attend Boise State University next year and plans to study health science and join the school’s cross-country and track teams.