Carmel resident Nina Johnson has always had an affinity for writing. As a child, she grew up in a home without television, so her creativity shined in creating screenplays and newspapers. 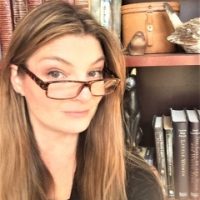 More recently, her efforts paid off when she was named the winner of a writing contest held by Mythraeum LLC, a Colorado-based publishing and film production company.

Johnson entered the contest after her husband persuaded her to make her writing a priority.

“When I buckled down and decided to spend more time getting my stories written, I started getting involved in some online writing groups. There are so many diverse people in writing groups,” Johnson said. “I started putting together an index card box to keep track of all the contests and call-outs for works.”

It was one such group that led her to Mythraeum. In October, Johnson found out about its contest, but the entry deadline was later that month, so she quickly got to work.

“It was kind of exciting for me. As long as submissions were written in English, it was quite an open call. I wasn’t sure how much competition there was going to be,” Johnson said. “Mythraeum follows the whole tenants of Joseph Campbell. He has this neat concept that all stories are based on basic human myths. So, I thought this could be interesting. The contest was based around the Pygmalion myth.”

Her fictional story focuses on the obsession Pygmalion had with creating a perfect woman.

“To be obsessed with someone looking so much like an object, I started thinking he was psychopathic. So, this story started forming in my head. That’s how I came up with my idea,” Johnson said. “People understand artistic obsession, but then I pushed it a little further. This obsession could be dangerous.”

Mythraeum holds six contests per year, and one winner out of the six will have their story made into a short film. Johnson hopes to find out if she wins by March.