You are at:Home»Current in Zionsville»Zionsville librarian publishes research on bookmobiles 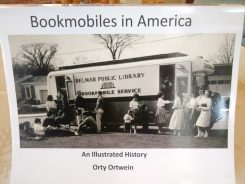 A chance sighting of a bookmobile in Illinois led Orty Ortwein, the Hussey-Mayfield Memorial Public Library’s assistant department head, down a path to write his first book.

“I was embarrassed as a librarian that I didn’t know that they were still around,” Ortwein said. “Frankly, I hadn’t seen one for a long time.”

He became intrigued and beagan to write blog posts on the subject until he realized he had enough material to compile a book.

“Finally, it became a full- blown project,” he said.

Ortwein was surprised that no one had published anything recently about bookmobiles, so he used Amazon’s self-publishing service. His book was completed in 2015.

More than 200 bookmobiles are covered in “Bookmobiles in America: An Illustrated History,” which follows the variety of ways bookmobiles have evolved from horse-drawn wagons through today’s variations.

“I was surprised they’ve been around as long as they were, since cars, really,” Ortwein said.

The book is divided into hundreds of shorter entries about books and ways that they are transported around the world. It has many entries about the Midwest.

Ortwein said that Carmel has a smaller bookmobile, and many library systems in Indiana utilize them, with many traveling to senior centers.

“They’re making a mild comeback,” he said. “As library budgets get cut, they’re a cheaper alternative, which is not a good thing,”

Ortwein also explores the advent of sending books via parcel post, and a successful lobby by the American Library Association in 1914 to have books sent at a less expensive rate, a service that still exists today.

He occasionally adds items to the blog at bookmobiles.wordpress.com as he comes across them.

“Anyone who is interested in libraries or who works in the library world would find this interesting,” Ortwein said.