You are at:Home»Current in Fishers»Indiana Dept. of Transportation opens 106th Street, I-69 interchange Dec. 7 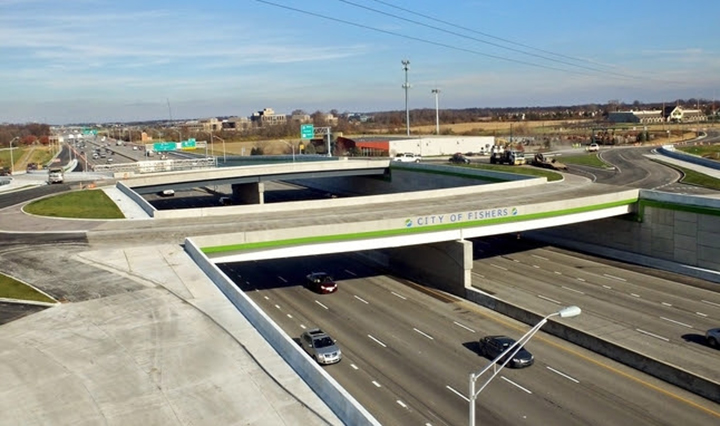 The new I-69, 106th Street interchange is a two, two-lane bridge in an oval roundabout fashion.

After months of construction and changed traffic patterns, the 106th Street and I-69 interchange opened the evening of Dec. 7.

According to a press release sent to Current from the Indiana Dept. of Transportation, INDOT contracted Walsh Construction to build the $21.7 million interchange. The City of Fishers and Hamilton County contributed $12 million toward the project.

Walsh Construction began the construction in April with the demolition of the 106th Street bridge across I-69, which has been replaced by two, two-lane bridges over the interstate. Each bridge carries one-direction traffic in an oval roundabout.

A City of Fishers logo is featured on the southern side of the 106th Street interchange. (Submitted photos)

“We all have common paths in seeking safe, efficient and accessible transportation,” INDOT Commissioner Brandye Hendrickson stated in the press release. “Collaborative partnerships lead to dynamic projects like this that have resounding benefits, strengthen communities and take Indiana to the next level.”

Active growth in Fishers encouraged the traffic reconstruction, and current and future developments near the interchange are expected to bring more traffic to the area.

“We are very excited about the opening of the new 106th Street interchange. This improvement project is a crucial part of the overall plan to increase the flow of traffic in the area, improve residents’ and commuters’ quality of life, and open up greater economic development opportunities along the I-69 Corporate Corridor,” Fishers Mayor Scott Fadness stated. “I am thankful for the collaborative partnership with INDOT and the continuing efforts to develop innovative projects that better serve the community.”