You are at:Home»Current in Westfield»Rodney Jones receives Quilly, EXPY awards, set as producer for ‘Soul of Success’

When he followed up his first book, “UNcommon,” with his second “Beat the Curve,” Rodney Jones didn’t expect to pursue the path any further than becoming a bestselling author. Yet last month in Hollywood, the Westfield resident received the Quilly and EXPY awards. 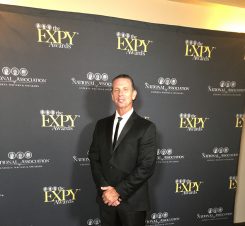 Rodney Jones received the Quilly and EXPY awards in Hollywood and was selected as a producer for “Soul for Success.” (Submitted photo)

Jones received his second Quilly Award for “Beat the Curve,” and the next night he received the EXPY Award commemorating his success in communications. While Jones was in Hollywood, he was approached by Nick Nanton with a request of becoming a producer on a film autobiography on Jack Canfield, co-author of “Chicken Soup for the Soul.”

“(Canfield) is world renowned for being an entrepreneur, a coach and helping entrepreneurs to reach different levels of success,” Jones said. “It’ll be up for a Telly Award, and if the movie gets awarded a Telly Award, I get awarded the Telly Award as well. I’m listed on all credits as a producer of the movie. This is huge. I’m very excited about this because it’s possible that once I learn how to do this and see the insides of it, I might possibly do an autobiography on my own story.”