You are at:Home»Night & Day»Entertainment News»Studio 15’s final performance to be put on by Carmel Theatre Company 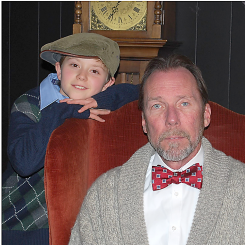 Dayln Stewart and Rick Sharp play the childhood and adult Dylan Thomas in “A Child’s Christmas in Wales.” (Submitted photo)

Studio 15 will be torn down for construction purposes in the Carmel Arts and Design District. CTC was aware of the upcoming construction prior to moving into the space and said it has been very grateful to the mayor and the City of Carmel for allowing it to utilize the space.

“We have very much appreciated the generosity of the city for giving us the space,” said John Clair, chairman of the board for the Carmel Theatre Company.

“A Child’s Christmas in Wales,” was a poem written for radio by poet Dylan Thomas. The work has since been adapted into a play. It is a nostalgic re-telling of what Clair described as “scary ghost stories and tales of the glories of Christmases long, long ago.”

The show will include performances of popular holiday tunes, including “The Holly and the Ivy,” “Christmas Pudding” and traditional Welsh Christmas songs.

“Celebrate the joys of all the shows that have been done at Studio 15,” Clair said.

Following the performances, CTC will put its equipment in storage and search for a new location.

Tickets are $15 for seniors and children, and $18 for adults. Tickets are available at brownpapertickets.com. Reservations can be made by phone or e-mail at info@carmeltheatrecompany.com or 317-688-8876.