You are at:Home»Current in Carmel»Carmel Community»Bolt for the Heart on a mission to put AEDs in state police cars 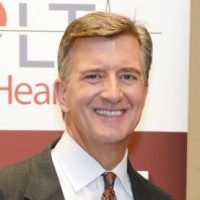 The Bolt for the Heart board of directors is determined to put Automated External Defibrillators in every Indiana State Police patrol car.

The fifth annual Bolt for the Heart 5K run/walk is set to begin at 9 a.m. Thanksgiving Day (Nov. 24) at the Palladium’s Center Green in Carmel.

Pierre Twer, president of the Bolt for the Heart, said the board realized there was a state police need for AEDs, which are used to restart someone’s heart in case of sudden cardiac arrest.

“They have about 350 cars on the roads in Indiana and very few of them have AEDs,” Twer said. “We’ve been able to put well over a hundred in these troopers’ patrol cars. We’re going to earmark all the proceeds for this year’s race and next year’s race to try to get an AED in every car.”

Twer said 15 AEDs were recently given through a generous donation from IU Health. Twer said IU Health has pledged to give 50 more by the end of the year. Each AED costs approximately $1,500.

“Our goal this year was 75 AEDs, and we already have 65 committed and we haven’t had the race,” Twer said. “So we’re in good shape.”

Twer said race registrations are trending ahead of 2015 at this juncture. He said there were approximately 2,000 runners and walkers last year.

Twer said he expects 20 to 25 AEDs will likely be able to be purchased from race proceeds.

Twer said it’s a U.S. Track and Field certified course and everyone gets a time. Approximately 40 percent are walkers, Twer said.

“Everyone receives a long-sleeve race shirt and every finisher will get a finisher’s medal as well,” Twer said.

Registration fee is $35 and is tax deductible. To register, visit boltfortheheart.com.