You are at:Home»Current in Carmel»Carmel Community»Australian family picks Carmel for relocation 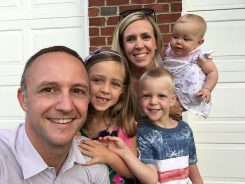 Chris and Erica Belli and their children, Addisen, Ryder and Harper, recently moved from Melbourne, Australia, to Carmel. (Submitted photo)

When Chris Belli decided it was time to move his young family from Australia to the United States, he could have chosen the warm beaches of California, the scenery of the Rocky Mountains or anywhere else, for that matter.

But it wasn’t a difficult choice. The Belli family decided they wanted to move to Carmel, and without a job lined up, they began the process of moving across the world.

“We really moved without knowing what was going to happen. It was kind of a big gamble for us,” Belli said. “Fortunately it all worked out. We moved to Indiana on a Friday. I started work on the Monday, and my daughter started school on a Tuesday.”

Belli, who worked in the horse racing business in Australia, said it would have probably made more sense to transfer to a job in Lexington or Louisville, Ky.. But he kept hearing so many good things about Carmel that he wanted to call it home.

“The cost of purchasing homes appealed to us, and the cost of living in general,” he said. “The reason we settled on Carmel was all of our friends with school age kids spoke so highly of the quality of the schools in Carmel, so that was probably the biggest determining factor.”

Belli landed a job in downtown Indianapolis at Studio Science.

“I’ve got a view of (Monument) Circle from my office,” he said. “I’ve got the luxury of driving out of the metro area and a nice peaceful, quiet spot up in Carmel, which is great.”

Belli’s wife, Erica, grew up in southern Indiana. The couple met in college in Melbourne when she was an exchange student. After they both completed internships in Louisville, they got married and moved to Australia, where their three children were born.

The family has transitioned well to life in the U.S., Belli said. He’s been impressed by Hoosier hospitality and the ease of traveling around the area. He most misses his Australian coffee, for now.

“I think if you ask me in January or February I’d certainly miss the Melbourne summer and the beaches,” he said. “(Those) will be the hardest things for me (to live without) once winter really kicks in.”