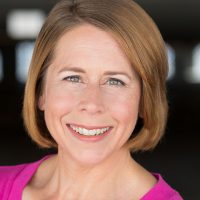 Character Sally Bowles is a sexual outcast and a misfit who chooses a life of freedom and ignorance. The young performer in the Tony Award-winning musical “Cabaret” is a contradiction in terms. An emotional roller coaster.

Or as actress Cynthia Collins, who will play the role of Bowles in the Actors Theatre of Indiana’s production Nov. 4-20 at the Studio Theater described her, “she’s so messed up.”

“The beautiful thing about roles like this is that they don’t come around very often,” said Collins, taking on the part for the first time in her 25-year professional career. “This role is so beautifully written, and the wonderful thing for an actor is that it’s a role you can really sink your teeth into. There’s nothing simple about this character.  No, it’s not my life, but I feel fortunate to be able to step into Sally’s world each night and bring it to life.”

Set in 1931 Berlin as the Nazis are rising to power, “Cabaret” unfolds in the nightlife of the seedy Kit Kat Klub and revolves around young American writer Cliff Bradshaw and his relationship with Bowles, a 19-year-old English  cabaret performer. Overseeing the action is the Emcee at the club, which serves as a metaphor for the ominous political developments in Germany.

Based on Christopher Isherwood’s short novel, “Goodbye to Berlin,” with music by John Kander and lyrics by Fred Ebb, the musical debuted on Broadway in 1966 and won eight Tony’s.  It was followed by numerous productions in London and New York, as well as the 1972 film starring Liza Minnelli. Collins saw the Tony-winning Broadway revival in 1998.

“We know our audience,” said Collins, also a cofounder of ATI and its associate artistic director. “We’re not going over the line. Actually, there is no foul language in it because the script was not written that way. But the content is pretty heavy.”