You are at:Home»Current in Carmel»Kickstarter campaign launches for new toy biz 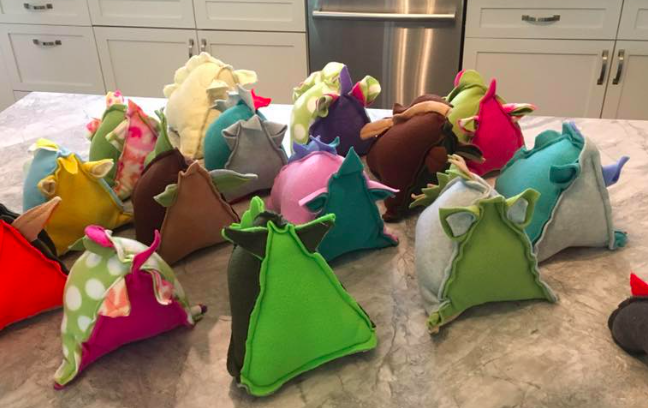 Werzids are soft, triangular-shaped, stuffed toys with different colors and textures on each side. (Submitted photo)

Joshua Kirsh has invented a toy called the Werzid. It’s a soft, triangular-shaped, stuffed toy with different colors and textures on each side.

He says people often ask if, “What is it supposed to be?”

The answer? Anything your imagination comes up with.

Kirsh, the father of a 4-year-old son, Holden, works during the day for the City of Carmel, working as an engineering administrator, helping let the public know about traffic projects. He also sits on the Carmel Plan Commission and the Carmel Clay Parks Board.

But in his spare time, he decided to found the Hoosier Made Toy Company to launch this new toy he created to help engage kids into using their imagination rather than just being told “how to play.”

“I feel like this toy is a pivotal toy,” he said. “It comes at a time where kids are more inclined to look at a screen.”

Kirsh said the response has been pretty exciting so far.

“The first time I gave them to kids, I didn’t have to tell them what to do,” he said. “They already knew.”

Kirsh started a Kickstarter campaign to help launch production. He’s already raised more than $2,500 of his $3,600 goal, and the deadline is Nov. 12.

Kirsh said he plans to partner with Noble of Indiana to create the toys, and workers with disabilities will be employed. He said it’s a great opportunity to put Hoosiers to work, especially this segment of the population that can have trouble finding employment.

“I’ve always felt that these individuals were an untapped asset in our community, and job statistics show that many capable, willing and hard-working individuals are without employment,” he said.

Kirsh said he has also pledged that for each toy he sells he will give one toy away to a child in need.

Donors to the Kickstarter campaign of $19 or more get their own Werzid shipped to them once production is up and running.

To donate, visit kickstarter.com/projects/2086277329/werzid-by-hoosier-made-toy-co. To learn more about the toy, visit werzid.com.