You are at:Home»Current in Fishers»Fishers grandma accomplishes dream of driving a monster truck 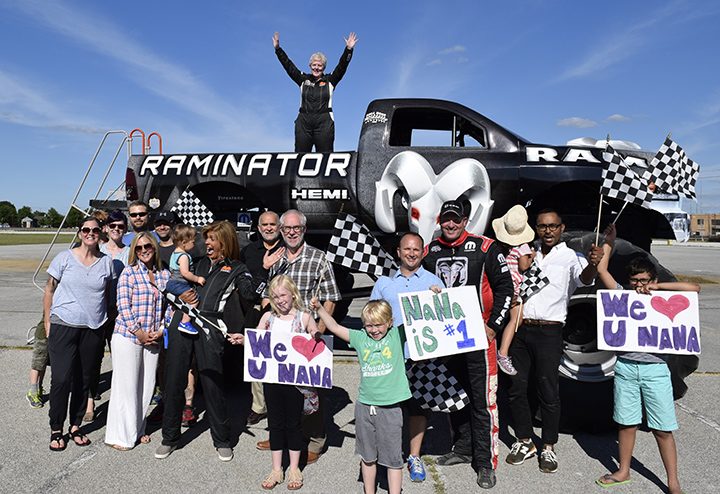 Sheryl Beerbouer stands on the Raminator, a monster truck driven by Mark Hall, as her family, Hoda and Hall stand before it. (Submitted photo courtesy of NBC/The Today Show)

Sheryl Beerbouer, Fishers, has always had a thing for monster trucks.

Her three daughters knew this, and when her oldest daughter, Kelly, saw a story on the Hoda and Kathy Lee Today Show about accomplishing bucket lists, she thought her mom would be the perfect fit.

Kelly nominated her mother to achieve her bucket list dream of driving a monster truck, and Sheryl was one of three people to be selected.

The daughters worked together to truly surprise their mother, and Sheryl’s middle daughter, Erin, decided to tell her mother they were going to downtown Indianapolis for dinner. She said the family would stop by the Indiana State Fairgrounds to pet the horses, another favorite activity of Sheryl’s, before dinner.

Little did Sheryl know, Hoda was waiting there with driver Mark Hall and the Raminator, a monster truck, for Sheryl to drive.

The group led Sheryl to the grand stands where the Raminator was waiting.

“Behind them is this big, black tarp I didn’t even notice, and (Hall) started the engine, and it’s the loudest sound. It’s just awesome,” Sheryl said. “The guy drives out and parks right beside us, and Hoda starts talking, and she said, ‘I know you love monster trucks and, … you are going to ride in it and drive it.’ My jaw dropped, and I thought, ‘How can I drive that thing?’ but my daughters had given them my measurements. They had made me a completely authentic, fireproof suit I wore and a regulations helmet the had (Hall’s) signature on it.”

Sheryl drove the truck around the grandstands several times before Hoda revealed another surprise for her.

Mark Hall would drive the monster truck – with Sheryl in the front seat – up a ramp and over six cars.

“It was just so much fun, and we were out there a couple of hours I guess, and they just did a great job,” she said. “It was just a very special day.”