You are at:Home»Current in Zionsville»Startup Boosterville moves into former PNC bank building

Pam Cooper wasn’t planning to move her business into a dedicated office space, but thanks to circumstance, she and six employees are temporarily occupying the former PNC bank building at 390 S. Main St. 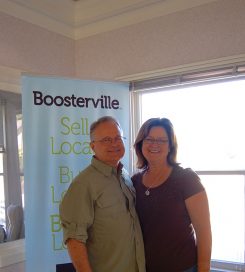 “It just all came together,” Cooper said.

Cooper and her husband, Tom, started Boosterville in the entrepreneurial and co-working center zWORKS more than a year ago. When another zWORKS business searching for a dedicated location didn’t want to occupy the former bank, Cooper recognized an opportunity.

“They want to keep these companies in Zionsville,” Cooper said of the support she received from the town, zWORKS and the Boone County Economic Development Corp.

The town-owned property had been vacant since 2013. Cooper said the building will eventually be demolished when the property sell, but expects “we’ll be here for quite a while.”

Boosterville is a card-linked platform that connects merchants to cause-driven buyers. Using the Boosterville app, supporters of nonprofits, schools and charities can purchase everyday items from local merchants with a portion of the sale benefiting a selected cause.

“We’re trying to give relevancy to the offline merchants,” she said. “We felt like we fit a nice niche there. You can only buy from brick and mortar merchants.”

After working on the product for three years, Cooper said the website is launched and is ready to partner with nonprofits and merchants.

“We can still walk back and forth to zWORKS and see our buddies there,” she said.