You are at:Home»Current in Fishers»OneZone Chamber of Commerce presents State of the Schools for Carmel, Fishers 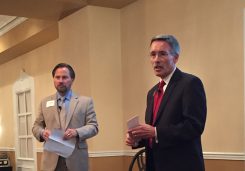 On Sept. 14, Dr. Nick Wahl and Dr. Allen Bourff presented the State of the Schools at the OneZone Chamber of Commerce luncheon.

Both administrators highlighted accomplishments of their school systems. Carmel High School has 154 clubs, 20 interscholastic sports and five club sports. Wahl mentioned the recent 30th consecutive state championship for the girls swimming and diving team, as well as CHS’s DECA team and its placing in the international competition. Bourff detailed the various championships Fishers and Hamilton Southeastern are known for, including the mock trial team, We the People, Fishers High School speech team and others. He also mentioned elementary schools in the district had donated $1 million to the American Heart Association over the past few years.

“We have so many good programs at both of our schools,” Bourff said. “There aren’t many counties anywhere in the nation that can talk about the quality of schools that Hamilton County can.”

“When I meet these students and see all these kids in our schools, it reaffirms my belief that the leaders of tomorrow are in our classrooms today,” Wahl said. “We are in good hands, so be affirmed to that.”

“We are putting together a core of people who will enable all teachers and administrators to work with students in something other than discipline problems in classrooms,” Bourff said. “Many issues are not discipline, but mental health issues.”

Bourff said the referendum also led to teachers receiving better salary. Teachers at HSE were paid in the lower third of districts competitive to HSE, but the salary was raised to the middle of the pack. Bourff said he recognized that progress when at an HSE job fair, 800 people attended instead of the expected 150.

The superintendents showed a video of Carmel Mayor Jim Brainard and Fishers Mayor Scott Fadness supporting the schools. CCS has $15 million from local referendum funds and HSE has $17 million.

“This is the arena in which we operate and we compete for the best and the brightest, and that’s why I say we have now developed a referendum state,” Bourff said. “Carmel will be going out for a referendum. You just experienced it in Hamilton Southeastern. It’s happening throughout the state. A number of counties are seeing it and some are successful, some are not.”

Out of CCS’s $110 million budget, 93 percent is for personnel, according to Wahl.

“That’s exactly where that money should be,” Wahl said. “In the event that the ($15 million) referendum is not successful, that is 130 teaching positions. Strong schools, strong community, strong economy.”

“When we speak about schools and speak about connections with the economy, home values are affected by strong schools,” Bourff said. “Carmel and Fishers have both enjoyed a designation as being a very safe community. At different points we have even been right there next to one another in the rankings. So you think it’s a coincidence that where you have a strong, safe community, you also have strong schools? It’s a symbiotic relationship.”