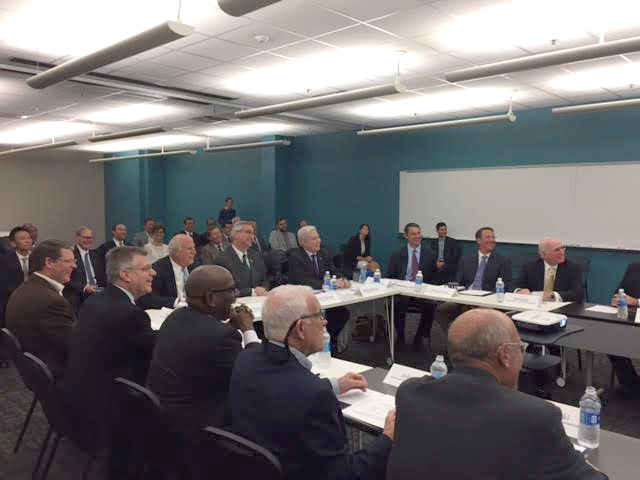 Pence lauded Indiana’s 4.1 percent unemployment rate, which is lower than the national rate of 5 percent.

“Obviously, the credit for that goes to all of the hardworking people of Indiana, to our entrepreneurs and business owners investing in ways that are creating jobs,” Pence said.

IEDC President Jim Schellinger echoed Thompson’s statement in regards to the importance of Regional Cities and its impact on the state’s well being.

“The Regional Cities Initiative taught us a lot about what vibrant communities of the future can be,” Schellinger said. “In addition to be cool places to live, work and play,  they are going to be communities that have an ecosystem for innovation. It’s proven that that drives wages up and improves companies, and we’ll start that at the most fundamental level.”

According to Eric Shields, vice president of Policy and Strategic Initiatives for the IEDC, 100 projects are up for consideration throughout the state, and 19 have come to the IEDC for processing. Of those 19, six have been approved and the remaining 13 are under review. Nine are from the North Central region, three are from the Southwest region and one is from the Northeast region.

Of the $96 million tied in with the six approved projects, $65 million is coming directly from the private sector and $11 million from the Regional Cities Initiative. Shields said the goal for each project is to have less than 20 percent of funds come from the state, and that is taking place here.

“Each of the regions are working to develop objective metrics that they can use to measure their success,” Shields said. “In the short term, what we are looking at is, ‘Are they implementing their plans?’ From what we’re seeing today, that’s certainly the case.”