You are at:Home»Current in Carmel»Carmel Community»Carmel VFW Post to hold inaugural Fall Festival 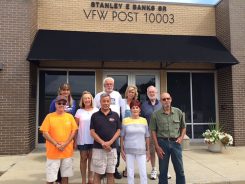 Carmel’s VFW Post is holding its first fall festival from 4 to 10 p.m. Oct. 8. Proceeds will support veterans programs during the holidays.

Roman Chang, VFW quartermaster and Vietnam combat veteran, said the goal is to make $10,000 more than the cost of the event.

The VFW,  a nonprofit, donates to a wide variety of charities, including Special Olympics, the American Cancer Society and National Veterans Service Fund.

“Donations everywhere are down this year,” Chang said. “We decided we needed to do something. Regardless of what happens, we will make it fun.”

Besides donating to charities, the VFW supports veterans directly by putting together care packages and delivering them to the VA Hospital the Sunday before Christmas.

“The veterans just love it when we show up,” Chang said. “Not just because we are bringing gifts, but because they appreciate our acknowledgment of their service.”

The festival will be held in the parking lot of the VFW Post at 12863 Old Meridian St. It will include live music by Big Daddy Caddy from 6 to 9 p.m., a craft beer truck provided by Monarch, food from Wild Boar BBQ, raffles for two guns, a 48-inch television, games, a dunk tank with local celebrities and free admission and parking. The post’s bar will also be open.

Karen Shatley, canteen manager, who came up with the idea for the fall festival, could not imagine doing anything else.

“We are like family here,” Shatley said.  “I just can’t imagine having another job. Some of these guys don’t have families, so I feel like they are part of my family.”