You are at:Home»Current in Carmel»Carmel Community»Carmel Clay school board member Patricia Hackett decides not to run again

Tricia Hackett’s decision not to run for a third term for the Carmel Clay school board goes back to why she ran in the first place. 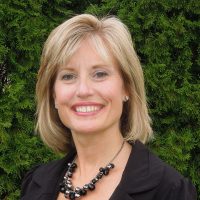 At first, Hackett laughed off a suggestion she run for school board in 2008. But eventually she was persuaded to consider it.

She said her husband, Scott, and children, Stephanie, now 26, and Emerson, 23, all gave reasons why she should run. So she looked at the board and looked at her skill sets.

“The four significant strengths were first I’m a woman, and there were none at the board at the time,” Hackett said. “I’m a teacher by trade, and there was no one on the board with that education background at the time.”

Hackett was a special education teacher for several years before starting a family.

Hackett’s two children were in Carmel schools then. She said there are pros and cons to that, but right then there was an imbalance in that respect.

Hackett said two years later some elected members had some of the same attributes.  In 2012, she decided she did have experience and knew that the Carmel school board traditionally has had a lot of one-term school board members. So she ran again.

Hackett said the board does have experienced members now. The present makeup is four women and one man.

“Am I 100 percent ready to leave the board? No, because I really enjoyed my time,” Hackett said. “Our board has done several good things to get us in some solid positions.  Any good leader looks for the right time to jump in and the right time to hand off the baton to the next person.”

Hackett was vice president of the board from July 2009 to July 2010.  She then spent the next 1½ years as president.

Hackett has done volunteer work with homeless youth at Outreach Inc., in Indianapolis for two years.

“They’ve asked me to take on an increased role there,” she said. “I’m going to do training with one of my two dogs (Boston terriers), so she’ll be a therapy dog. I’ll continue to be involved in Carmel Clay Schools.”