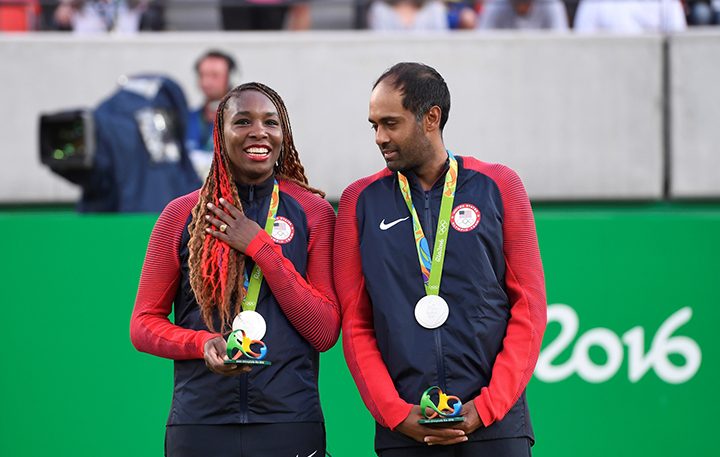 The Carmel High School graduate was added to the U.S. Olympic tennis team less than week before the opening ceremonies.

“Obviously, I never thought a couple of weeks ago that I would have a silver medal in my possession,” Ram said.

Ram, 32, and Williams, 36, were acquaintances but had never played together before.

“She’s fired up to play when she’s got the USA on her back,” Ram said. “It’s an incredible achievement, but it’s also no surprise.”

Ram and Williams almost lost in the first round to the Netherlands’ Jean-Julien Rojer and Kiki Bertens, saving two match points before rallying to a three-set victory. On one match point, Ram hit what he called the luckiest shot of his life.

“I made a pretty unlikely reflex volley to save the match,” Ram said. “It was one of those things that I happened to be in the right place at the right time.”

Ram said winning the silver gave him a similar feeling, only on a grander scale, as being on the NCAA championship team for the University of Illinois in 2003.

Ram, who had lost with Brian Baker in the second round in men’s doubles, was joined by his wife, Zainab Saqib, in Rio.

“The two coolest things we got to do was watch (the) 4×100 relay in swimming with Michael Phelps, and they won the gold,” Ram said. “Then we watched the USA (men’s) basketball team against Australia. Just to watch the athletes and how everyone plays so hard for their country is phenomenal to see. Not just American, but to see how all the countries play for countries is inspiring.

“It’s pretty neat to have someone of his stature to come in and play,” Ram said. “It’s nice of him to donate his time. He’s someone I consider a friend and somewhat of a mentor in certain ways.”