You are at:Home»Current in Carmel»Parents honor late daughter by helping others facing loss of child 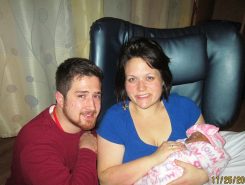 The Jasper couple’s daughter, Athena Rosemary, was born with hydrops fetalis, a condition where abnormal fluids build up in two or more body areas of a fetus or newborn. Her condition worsened after she got an infection and died two days later on Nov. 25, 2015, at Riley Hospital for Children in Indianapolis. She was just 12 days old. Ashley had been transported from Evansville to Indianapolis to have the baby because of complications.

“The first time I held her was right before she died,” Ashley said. “We took the tube out of her and two minutes later, she passed away.”

On top of their sorrow, Ashley said they weren’t prepared financially for the funeral and burial costs.

“You never really think that is going to happen,” said Ashley, who has four healthy daughters. “We used her life insurance policy (as part of her husband’s health insurance plan) in funeral, burial and transportation services.”

Ashley, a 2003 Lebanon High School graduate, and Nick, a 2003 Carmel High School graduate, have set up a Memory Eternal Fund, a nonprofit that provides transportation, burial fees, funerals and monuments for children of any age who die in a Riley facility around the state, including Riley Hospital at IU Health North in Carmel. Ashley’s doctor said it would be a good addition for Riley Children’s Foundation.

“That’s generally if you are centrally located,” Ashley said. “In our situation, we would have had to pay $3,000 to get her from Indianapolis to Bloomington, where we ended up burying her, so it wasn’t even all the way home. I didn’t know how we were going to pay for it, but people stepped in to help. I didn’t want anyone to think like that when their child died. I want (parents) to take them home. No parent should have to go through that.”

The Spanenbergs have committed themselves to seek donations for the fund so they can help other families.

“When you lose a child you feel really alone and feel like it’s your fault, but it’s not your fault, obviously,” Ashley said.

To save expenses, Nick dug the grave for his daughter with two other fathers who had buried children.

“At first, I thought, ‘No way. I can’t bring myself to do that,’” Nick said. “But it kind of felt like I was tucking her in for the last time.”

Nick has since helped other families dig graves for parents who have lost children.

“I’ve made myself available for anyone who needs that assistance,” Nick said.

Information on the Memory Eternal Fund is available through Facebook.

While Ashley is a stay at-home mom for the four daughters, Nick said he understands financial pressure other fathers in his situation experience.

“I want to lift that burden,” said Nick, who works in the purchasing department for MasterBrand Cabinets.