You are at:Home»Current in Carmel»Legacy Travel Club’s launch party set for Aug. 11 with hopes to gain new members

Legacy Travel Club is taking the next step to launching. 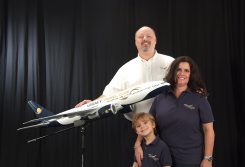 “We are building our membership base right now,” said Chris Allen, who owns the startup with his wife Sandy. “Our target for the first year is 9,000 members. We are well on our way there. That’s our target but we’ll have our trips going well before we get to our target.”

Allen, a Carmel resident, said the schedule of direct flights should begin in early 2017. There is a launch party for members or interested members at Columbia Club, 121 Monument Circle, Indianapolis, from 5 to 8 p.m.  Aug. 11. There will be complimentary hors d’oeuvres and an open bar. There will be handful of trips in 2016 that will be announced at the launch party for those interested in joining the travel program. Allen and his wife were both employees of ATA Airlines, which provided travel from Indianapolis from 1973 to 2008.

“We plan to go to all the destinations that were popular with ATA,” Allen said.

Among the planned destinations will be five locations in Florida, Las Vegas, the Caribbean, Mexico and Canada.

Family memberships are $199 for family and $149 for single people. Every year after that is $99 to renew membership. ATA operated Ambassadair Travel Club, which is still in operation under new ownership.

All 168 seats were sold for the inaugural day trip to Mackinac Island in Michigan in June.

Allen, 45, worked in the logistics department for ATA while his wife Sandy worked in marketing at Ambassadair.

“When we are up and running at 100 percent, we will have two chartered 737 aircrafts,” Allen said.

People wishing to attend a launch party should RSVP by calling 317-663-3016 and emailing members@legacytravelclub.com.