You are at:Home»Current in Carmel»Carmel Community»Carmel mom teaches Chinese through storytelling 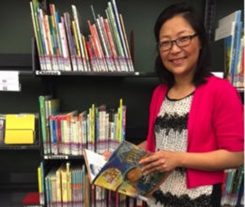 When Echo Wu moved to Carmel with her husband in 2014, she reached out to see if she could do Chinese storytelling for children at the Carmel Clay Public Library. Now it’s become a regular part of her volunteering work there.

“They can see, ‘Wow! This is how another part of the world does things!’” Wu said.

Last year at the library, she celebrated the Chinese New Year through storytelling, and recently she read for the Dragon Boat Festival.

Since moving to the United States in 2006, Wu has been passionate about teaching Chinese, from Long Island to Carmel. She first became interested when she discovered a Chinese school at Auburn University, where she received her MBA. She also earned a teaching certificate during a 2013 visit to China, and she said that raised her confidence as a teacher.

Wu has two children, and she wants them to learn about their Chinese heritage.

Both Chinese and non-Chinese students learn from Wu.

“The main interest is to promote Chinese culture and Chinese language,” she said.

According to Wu, learning Chinese can help growing children’s cognitive development, as well as giving kids a global mindset, understanding of other cultures and preparation for future careers.

Wu is part of a program called Transition to Teaching, and she said she hopes to find a teaching position at a school in the vicinity. When she feels discouraged, she remembers students’ positive feedback and growth.

“That’s what keeps me moving forward,” she said.