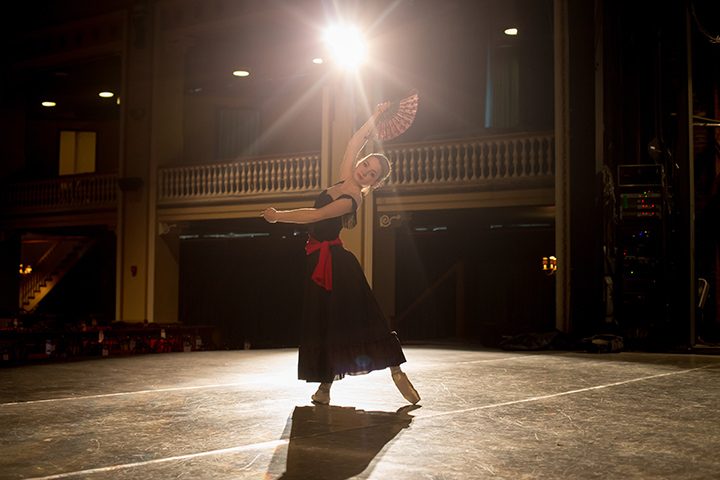 PR and Marketing Director Audrey Robson at the Basile Theater at the Historic Athenaeum. (Submitted photo by Mark Abarca.)

The Ballet Theatre of Indiana hosted its first benefit last year. For the benefit this year, there will be one new addition: films. The event will take place at 6:30 p.m. Aug. 27 at the Evan Lurie Gallery in Carmel, 30 W. Main St.

Stirling and Sabrina Matheson, co-artistic directors of BTI, were searching for ways to spread the word about their relatively young company, and they hoped to do so through online videos. They discussed combining dance and cinematography, which was the starting point for the film event. When the second season ended early, there was extra rehearsal time to be allotted for these video projects.

“(The films) will not look like the stage version,” Stirling said. “Everything was made specifically for the videos we shot.”

The benefit will feature four videos. There will be a short introduction to the company that was shot in various locations around the city. A music video for local singer Katie Pederson’s new album and a comical rendition of a staged audition also will be shown. Stirling said they are planning to shoot a film version of a ballet based on Edgar Allen Poe’s “Cask of Amontillado.”

“It’s fun to get a chance to see these new art projects and the sort of new branch of what we do as a company before anyone else in an exciting atmosphere,” Stirling said.

In addition to the films, patrons can enjoy wine and hors d’oeuvres while participating in a silent auction including donated items from local businesses.

Tickets for the event can be purchased online for $30. All profits from the tickets and silent auction will assist with BTI’s third season expenses. BTI also is fundraising online through an Indiegogo campaign, where people can donate a specific amount and receive tickets or art prints in return.