You are at:Home»Current in Fishers»Award-winning Fishers chef cooks up quality food from scratch 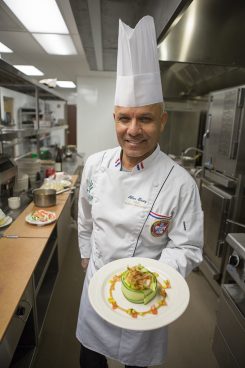 Fishers chef Allen Elsesy
is the food and beverage director and executive chef at The Reserve at Hamilton Trace. (Submitted photo)

Whether it’s in the front of his facility or back in the kitchen, chef Allen Elsesy has left his mark through personal training and an emphasis on high quality.

Elsesy is the food and beverage director and executive chef at The Reserve at Hamilton Trace in Fishers. While The Reserve is a senior living community, anyone can come in and order food.

For Elsesy, being a chef was not always his plan. Elsesy was originally attending Erasmus University, in Rotterdam, Netherlands, to study accounting.

“I actually started to cook to pay for my tuition,” he said. “The owner of the business came one day and told me he needed to talk to me … He said the executive chef quit, and he thought I was the most qualified person to do the job.”

After becoming an executive chef for the first time, Elsesy changed his major to culinary arts and eventually moved to the United States to finish his education at The Culinary Institute of America.

Elsesy has competed and won national cooking tournaments and has worked in many aspects of the food industry throughout his career.

“I have won numerous cooking competitions,” he said. “I used to compete three to four times a year, but now I’m down to once every two to three years.”

Elsesy has slowed down this past year, working fewer hours to make more time for his family.

According to Elsesy, his success is from hard work and making all of his dishes from scratch.

Elsesy said the greatest achievement in his career is in his teaching. Elsesy teaches Culinary classes at IVY Tech Community College.

“It’s a great feeling when you get a student out of high school and they have a dream to become a chef,” he said. “I have some students who have recently taken the position of executive chef. … For me, it is fulfillment.”