You are at:Home»Current in Carmel»Growth spurs enVista’s move on Meridian Street in Carmel 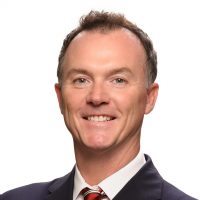 However, he didn’t want to leave Carmel, so enVista is moving from 11711 Meridian St. to 11555 Meridian St. Barnes said it’s about three buildings down.

“We were trying not to disturb the impact on our associates,” said Barnes, a Geist resident. “We could have gone to 86th Street in Indianapolis. There are lot of buildings there. Frankly, we like Carmel. We have easy access off Meridian. The new bypass is definitely making an impact. I’ll give the City of Carmel credit; I love the roundabouts. Getting in and out of the office space is efficient and effective now that the roundabout is done at 116th Street.”

Barnes said the move to new location should be complete by late August.  The company is a global-supply-chain consulting and IT services firm.

“We’re taking the entire third floor of the building,” said Barnes, adding it has approximately 5,000 more square feet in the new building.

Barnes said the space it was in now didn’t flow every well.

“We’re moving to a space with very open architecture,” he said. “Every single person in the office will have a view outside. All the conference and breakout rooms are in the center of the office. The actual seating is facing a window. Everyone is going to have natural lighting. We are increasing the number of team rooms and conversational rooms where people can have private conversations.”

Barnes said enVista has 431 associates, with approximately 150 in Carmel. He said he expects enVista to hire 25 more employees following the move.

“I’m the CEO of the company, and I sit out with the troops,” Barnes said. “I’ve never had an office.”

Barnes, who also carries the title of president, and John Stitz are enVista’s senior managing partners, founding the company in 2002.

“We’re entrepreneurs, so we are looking for different complementary and ancillary site solutions and services that allow us to generate revenue,” Barnes said. “It’s a combination of bringing on new solutions and new sources to the market and executing them.”