You are at:Home»Current in Zionsville»Town’s namesake lived near Lebanon 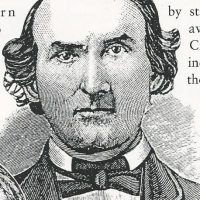 The man arguably most closely associated with Zionsville never lived within the village’s environs. William Zion, from whom Zionsville derives its name, decided instead to settle in the area around Lebanon.

Born in Virginia in 1812, Zion moved to Indiana in 1828. After marrying Amelia Sims in 1832, he worked as a blacksmith, dry-goods store owner and sheriff. During this time, he was also a staunch Republican and participated in state politics. In 1847, Zion was appointed a special commissioner to organize the Lafayette and Indianapolis Railroad. He is credited as the one most instrumental in the success of this venture.

Part of his effort involved convincing landowner Elijah Cross to use some of his property to plat a town through which the railroad would pass. Zion and Cross became partners and developed a rough plat in 1851. Six full blocks, three half-blocks and five quarter-blocks on approximately 28 acres became the foundation for Zionsville. The town was officially recorded in Boone County Jan. 26, 1852.

Zion was on his way to building a fortune. He continued as director of the railroad until 1866. Along the way, he invested in real estate and other ventures in Boone County. At the time of his death at the age of 68, he lived in Lebanon and was survived by his wife, five sons and two daughters.