You are at:Home»Current in Geist»Matt Wolfert joins Cathedral as director of major gifts 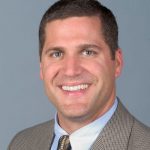 Cathedral High School has announced that Matt Wolfert has joined the school’s fundraising and development team as of July 1.

Wolfert has been brought into the role of director of major gifts at the school. He previously worked for the NCAA, where he directed corporate champion and partner programs as well as managed relationships with broadcast partners. He also has worked in corporate relations, athletics and marketing at Ball State University, Georgia Tech, the University of Notre Dame and Indiana University.

“As we approach our 100th year, Cathedral is poised to take a leap forward in next-generation learning built on a foundation of our Catholic Holy Cross values,” Vice President for Advancement Nicole Beasley said. “Creating a strong advancement team with individuals of Matt’s high level of expertise is vital to our school’s continued excellence in the next 100 years.”