You are at:Home»Current in Geist»Jered Pennington named next principal at Amy Beverland Elementary 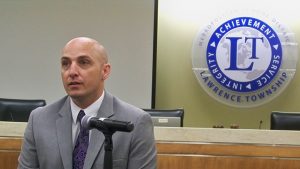 Jered Pennington has taken over in the role formerly held by the late Susan Jordan at Amy Beverland Elementary School. (Photo by Sam Elliott)

Pennington has spent the past four years as the assistant principal at Promise Road Elementary following 12 years of teaching — 11 at White River Elementary.

“The building (I was) in had roughly has 780 students and Amy Beverland is getting close to 820 students,” Pennington said. “The most notable difference in terms of the structure of the building is that I was in a building serving students in kindergarten through fifth grade whereas Amy Beverland is first through sixth grade with the kindergarten being at the Early learning Center there on campus.”

Pennington will succeed Susan Jordan, who was struck and killed by a school bus having jumped the curb outside the building during dismissal Jan. 23, in the role.

“I think it goes without saying that where they’ve been presents some challenges, but I also know that where they’ve been creates an opportunity for me to be successful. I want to make sure I not only value and appreciate where they’ve been, also where they currently are making sure that I’m not only sympathetic but supportive and most importantly getting to know them on a deeper level so we can start our work together moving forward,” Pennington said. “The last thing Amy Beverland needs is for somebody to come in and make wholesale changes. Their world has been turned upside-down and they’re on the path of healing and staying on their feet and moving forward and I look forward to working alongside them in that process.”

Pennington was selected from a pool of approximately 50 applicants.

“Having had the opportunity to meet and greet meeting many of the families, the staff members, the students and the support from the district administration has been nothing short of remarkable and I’ve been welcomed with open arms already at Amy Beverland and I look forward to continuing to get to know every single person in that building and continuing the great culture that exists there,” he said.

Pennington graduated from Western Boone High School and holds a bachelor’s degree in education from Indiana University-Purdue University Indianapolis. He earned his master’s degree and administrative license from Indiana Wesleyan University in 2008 and 2012, respectively. Pennington and his wife, Christy, live in Noblesville and have two teenage sons.

Pennington met with Amy Beverland students and families during an open house reception at the school May 24.