You are at:Home»Current in Carmel»Carmel Community»Carmel man Gary Rapp treks across U.S. on bike 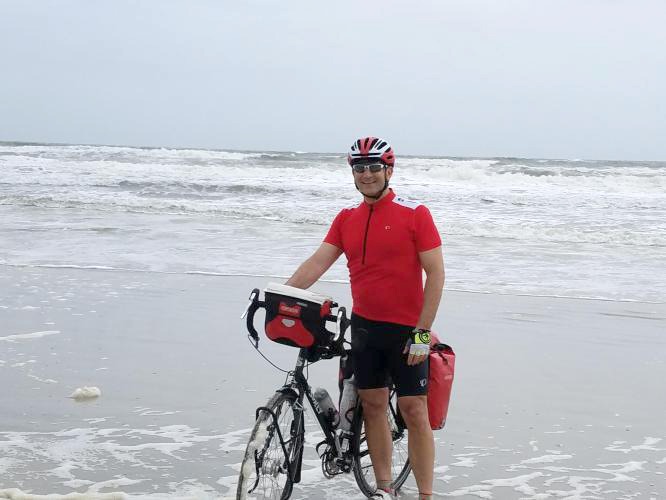 Gary Rapp during his bike across America. (Submitted photo)

The thrill of seeing the U.S. from the seat of a bicycle is what inspired Gary Rapp to take to the road on two wheels and map a route from Florida to Washington state.

“So much of the experience is lost when traveling by automobile at 65 miles-per-hour and only stopping when you need gas or food next to the interstate,” the 56-year-old Carmel resident said.

“Starting in Jacksonville Beach (Fla.) and finishing in Washington state, the hills (mountains) would come near the end of my journey, average temperatures would not be extremely cold or hot,” he said. “And, long boring rides across the badlands and Big Sky country would come at a time when I knew I could mentally and physically achieve my goal.”

It was just four years ago Rapp was 30 pounds overweight and working 60 to 70 hours each week. He joined a fitness center where he took an early morning spin class and fell in love with it.

“I remember after my first spin class, my body was sore for a few days but after the fourth class, my body adjusted,” he said. “I continued the spin class for two years before purchasing a road bike and riding outdoors. My road mileage in 2014 was 800 miles and 2015, 1,400. The week before I departed to Jacksonville, I had worked up to 150 miles per week.”

Rapp hit the road April 16 with Dr. David Lesser, a fellow biking enthusiast and Navy veteran who had planned on cycling a similar route across the country.

The trip took 49 days, with the duo averaging 73 miles each day.

“Due to a lack of hotels in North Dakota and Montana, we had to ride three consecutive, 100-plus mile days,” Rapp said. “The month of May, I rode 2,003 miles. It is amazing how the human body adjusts to the demands we put on it.”

During his trip, Rapp kept a daily journal, noting the unique things that happened to him daily. A common trend? How nice people were to him.

“I would typically stop for lunch around 1 p.m. and would walk into a small cafe and the locals would just stare at me like I was an alien from another planet,” Rapp said. “Once they discovered I was traveling from Florida to Washington, they immediately said, ‘You are crazy!’ On three separate occasions, the people who said I was crazy offered to buy me lunch, invited me to their home for dinner and a place to stay for the evening.”

During his journey, Rapp saw spectacular sites and visited historical places along the way. But the most important part of the trip was learning he couldn’t control everything.

“Being a slight control freak, I wanted to plan every single day down to the mile and the night’s sleeping arrangements all in advance,” he said. “But I learned bicycle touring is more enjoyable when you start with a loose plan and let go of the control. ‘Live for the moment’ (and) ‘trust the universe’ had my back, and even when it turned undesirable, at least it would make for a great story.”

To learn more about Rapp’s cross country trip visit his journal at crazyguyonabike.com/doc/HeadedNW.