You are at:Home»Current in Westfield»Behind the Badge: Westfield Police Dept. Sgt. Jackie Carter reflects on position 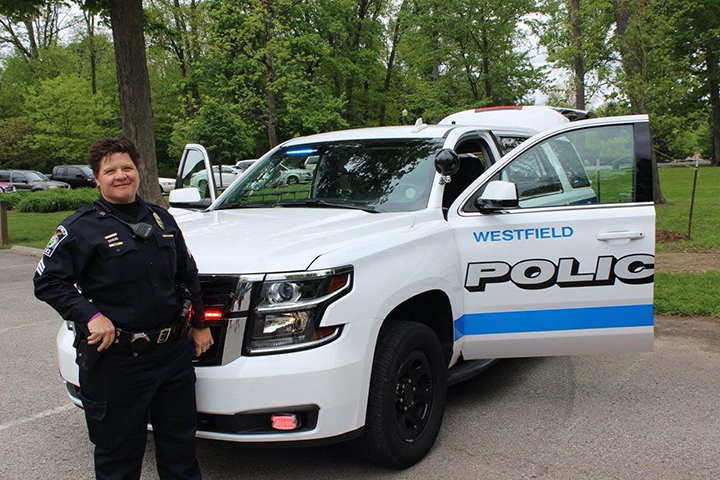 Sgt. Jackie Carter is one of six women on the Westfield Police Dept. (Submitted photo)

Sgt. Jackie Carter is one of six women on the Westfield Police Dept., and the only female on the night shift. Current in Westfield caught up with her to learn more about her duties and what it’s like to be a woman in law enforcement.

What’s it like being a woman in the force?

“It can be difficult. It’s hard to be recognized for your accomplishments when everything above you is male. In general, it is a male-dominated fields. For the majority of my career, I’ve been the only female on my shift or on my squad. I never feel like there’s a difference at the shift level (at the WPD). They don’t look at me as girl, and I don’t look at them as guys. We are cops.”

What do you want the community to know about your job?

“You can’t be everything to everybody. You’ve got to do what’s in the best interest of them at the time you make that decision, and sometimes those decisions are really hard. You can’t make everybody happy. There has to be a peacekeeper and somebody who enforces the rules. We don’t make them, but we are commissioned to enforce them, and, most of the time, people don’t want to be told ‘no.’ People take that personally, and that’s not personal at all. I’m not specifically targeting somebody, but if there are rules, you are not an exception. Most people who want to stain our reputation didn’t follow the rules and got told about it or arrested and didn’t like it. You can’t have thin skin in this job, you just can’t.”

What made you come to Westfield?

“There wasn’t a whole lot of ability to grow at Frankfort, that’s where I started in law enforcement in 2000. I was the first female ever in 2000 on that police force, and that was quite a big thing at the time. I’ve been (at WPD) for 14 years. This area was just growing like crazy, so I knew there would be opportunity.”

To recommend Westfield Police Dept. staff for a Behind the Badge article, email suggestions to anna@youarecurrent.com.