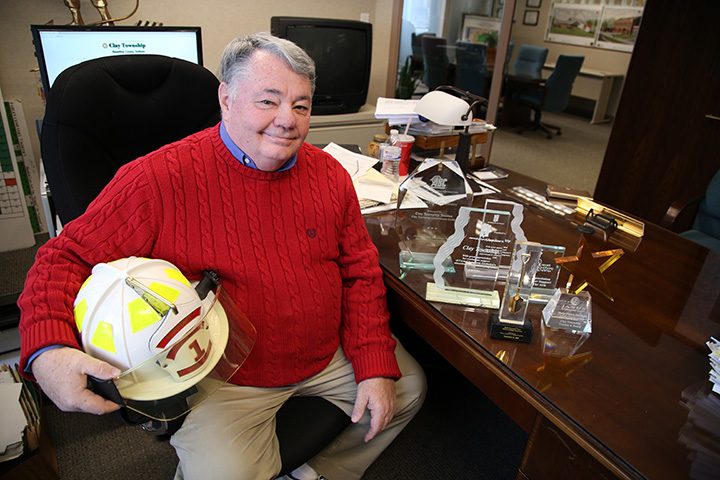 Doug Callahan is serving as Clay Township trustee after spending 11 years as chief of the Carmel Fire Dept. (Photo by Feel Good Now)

From 1973 to 2006, Doug Callahan was dedicated to saving people’s lives as a member of the Carmel Fire Dept. He eventually served as fire chief for 11 years.

But even in his retirement, Callahan is rushing to the rescue of those in need. 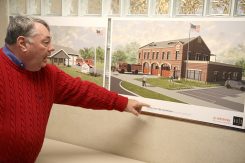 As Clay Township trustee, Callahan helps provide emergency financial assistance for those who desperately need it. Their house might have burned down or they lost their job and can’t afford to pay for a medication, such as a diabetic on insulin.

It’s a service many people don’t realize is available, especially when it seems most people think that residents of Hamilton County are all wealthy and not in need of assistance. But Callahan said that simply isn’t true.

“It’s more expensive to live in Hamilton County, and the reason people come here is because there’s a good school system and a good park system,” he said. “There is a need here, and we do our best to try to help people as long as they are honest and follow our guidelines.” 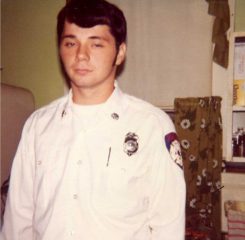 Township assistance is a unique government service where people can contact the trustee’s office at 10701 N. College Ave. and apply for temporary assistance. It is only meant to be short-term for people who prove they cannot provide for basic needs. In many cases, it is required that applicants have exhausted all other means to find help.

Applicants must be at the poverty level, which is reported at earning approximately $14,000 each year. Callahan said Clay Township allows for a 20 percent above that because of the higher cost of living in Carmel.

“We just ask that people be honest with us, because we are pretty thorough, and we do find out,” he said. “But if we can help you, we will. Even if we can’t provide money, we can help you find a job by referring you to Work One. We’ll work with you.”

Donna Hansen, caseworker for the township trustee, said the office helps people who are in an emergency or crisis situation typically with evictions and disconnected utilities. In other instances, the office is directing people to existing resources such as the Supplemental Nutrition Assistance Program.

“Township Assistance is more than just financial,” she said. “We help clients with their budgets, employment opportunities in the area, Children’s Bureau for child care whatever it may be, we try to help. We want the client to be successful.”

Callahan said it’s rewarding to be able to help someone in a time of need. He said he especially has a soft spot for helping children.

“I do enjoy helping people,” he said. “Even if their house isn’t on fire, I can help people now who really need my help.”

In addition to township assistance, the trustee’s office is also involved in parks, fire service and caring for parts of Clay Township that aren’t part of the City of Carmel, such as Home Place. But because of annexation, that land is shrinking. Of its $9 million budget in 2015, more than $2 million was budgeted for recreation, more than a $1 million for fire services, almost $5 million for a bond to construct new fire stations and Central Park and $120,000 for township assistance.

Despite a small budget for township assistance, Callahan said he wants to help everyone who meets the guidelines.

“If I have to go back and get additional funds, I will,” he said. “The state is usually pretty helpful.”

Carmel Mayor Jim Brainard appointed Callahan as fire chief in 1996. When Callahan retired in 2006, he considered running for trustee because of how much he admired past trustees during his time as fire chief. He’s now in his third term.

In September 2015, the City of Carmel honored Callahan by naming Fire Station 45 after him.

“Doug Callhan is one of my heroes,” Brainard said. “He carries himself with class and he always does what’s in the best interest of the public.”

Although he’s an elected official, Callahan said he doesn’t consider himself a politician.

“Why don’t we just do our job?” he said. “The important thing is to take care of the community. Quit clashing, and take care of people.”

Callahan’s work ethic and service to others comes from growing up in a family of 15 on a dairy farm. He’d work the farm before high school and come home from high school and work some more. He went into firefighting because his older brother, Mike, was a firefighter.

“I was accepted to Purdue, but I chose to go into the fire department,” he said. “And that’s back when the pay was something like $7,200 a year. Nowadays, a fire chief can make that in a month. You didn’t go there for the money. You went there to serve.”

Even though “everything wasn’t always peaches and cream,” Callahan said his parents took care of him, and that’s all you can ask for. That’s why he wants to give back to others, especially children.

“I just want every kid out there to have the same chance and opportunity that I had,” he said. 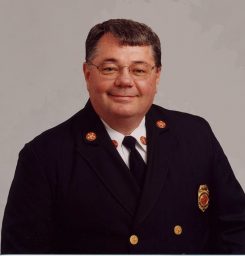 Who would you say your biggest influence is? “My father.”

What’s your proudest accomplishment as fire chief? “In my 11 years, I doubled the size of the department from 75 to 150 firefighters, and the building of three new fire stations.”

What’s your proudest accomplishment as township trustee? “So far, it has been the re-build of Fire Station 44, addition and remodel of Fire Station 43, building of a maintenance and training facility for the fire department, addition to Fire Station 45, and purchase of a new aerial truck for the Carmel Fire Department.”

Phone interview and applications for assistance are processed between the hours of 8 a.m. to 4 p.m. Monday through Thursday and 8 a.m. to noon Friday. To get an application started, call 317-846-2773 for a phone interview.