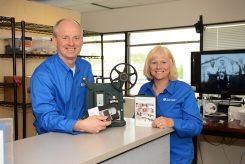 Jim and Linda Britt inside their office on West Carmel Drive. (Photo by Theresa Skutt)

Memories may fade. However, Jim and Linda Britt want to make sure their customers’ ability to relive them doesn’t.

“We were one of the people in town to have DVD offering capabilities,” Jim said. “I bought the first DVD burner (out), which was $5,000. That was kind of a dumb thing to do but it kind of put us ahead of the game. We’re been doing the DVD side of it since 2000 or 2001. We switched pretty early on.”

Jim said it was then about a 50-50-mix between customers wanting DVD and VHS.

“Now it’s about half who want DVD or Blu-ray and the other half want to go to a straight direct digital file (USB drive, external hard drives),” Jim said. “Some want both. Last week we had a woman who wanted VHS because she said her 85-year-old aunt who doesn’t have a DVD player.”

Linda said that was the first request for a VHS tape in quite some time.

Keepsake Media moved to 160 W. Carmel Dr., Suite 271, in 2010. They were previously in another Carmel office, near 96th Street and Keystone Parkway. While the Britts still live in Noblesville, Jim said they moved the office to Carmel because they found a majority of their customers came from Carmel or the north side of Indianapolis.

“Our most recent addition is to be able to scan film at high definition with a frame-by-frame scanner,” Jim said. “We were doing standard definition 8mm transfers before.”

Linda said they have the ability to scan a variety of items.

“People bring old letters to us that their parents have written,” Linda said. “We’ve scanned old photographs and old media.”

Recently, a woman brought in an 8mm film from when the Beatles performed at the Indiana State Fairgrounds in 1964.

Another request came from a Kokomo family, who wanted to convert a reel-to-reel audiotape of their father, a radio personality in the 1950s, interviewing Eleanor Roosevelt.

Jim said they have even converted some 8-track tapes from the 1970s.

“I didn’t know you could get 8-track personal tape recordings from then but we have had a few of those show-up,” Jim said.

Keepsake also has the ability to save some tapes that have been broken or damaged.

“A lot of times there is a cost associated with it, but at least they haven’t lost everything,” Linda said.

“We’ve purchased new equipment to clean it,” Jim said. “We had film from the 1930s that was so old it had vinegar syndrome. It was dehydrated and stuck to itself.”

Jim said they were able recover most of it.

Linda said much of their jobs are for weddings, anniversaries, funerals and special events.

John McCashland, McCordsville, had been looking to something special for his wife Mary for her first Mother’s Day as his daughter Mya was born May 31, 2015. McCashland had collected photos through the year and Keepsake turned it into a nine-minute video.

“They did a fantastic job,” McCashland said. “For what I got, I thought the prices were reasonable.”

Jim came from the airline industry and Linda’s background was in sales and marketing when they started the business.

Jim said they are very aware they are handling their customers’ precious memories.

“We’re conscientious that whatever we are handling, we get back in their hands,” Jim said. “If we don’t do that it would ruin it.”

Tips for success from the Britts