You are at:Home»Current in Geist»Fishers City council approves comprehensive plan

After nearly one year of work planning, strategizing, discussing with task force members and the public, the completed and finalized Fishers 2040 Comprehensive Plan was unanimously approved on second reading by the Fishers City Council June 20. 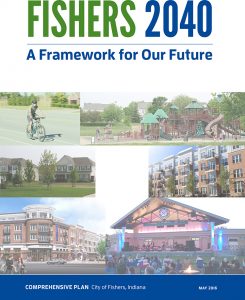 “It’s certainly been a long journey all of us began last August in earnest,” Fishers Deputy Mayor Leah McGrath said. “Since I was last before (the city council) in March for first reading, we’ve had two community open houses, we’ve accepted public comments online and we were also at plan commission in April for a presentation and back in May for a public hearing.”

That public input led to a number of minor changes and edits throughout the document, including definition clarifications as well as extensions of some of the plans special study areas in addition to some changes on specific roads’ width and number of lanes.

“Most of the comments we received at plan commission and public input revolved around transportation,” McGrath said. “We have a robust transportation plan.”

Plan recommendations changed since the Fishers 2040 first draft included keeping 126th Street east of Cyntheanne and 136th Streets at two lanes, but maintaining enough right of way to expand them to four lanes should that be deemed necessary into the future.

The full 179-page Fishers 2040 plan, with chapters stemming from task forces specifically focused on land use, residential, transportation and parks and open spaces, can be viewed at Fishers2040.com.

“When Leah came on board, I said, ‘Well, I have a small project I’d like you to start on,’ which was basically writing the road map for the next 25 years for our city,” Mayor Scott Fadness said. “She and her team hit the ground running, and to be where we are today with I think a very solid document that really provides a framework for us to do some great things for our city was really all Leah and her team facilitating that — and all the residents who took the time to be a part of the committees and share their insights were very helpful as well.”