You are at:Home»Current in Carmel»Carmel Business Local»A Cut Above Catering offers cooking lessons 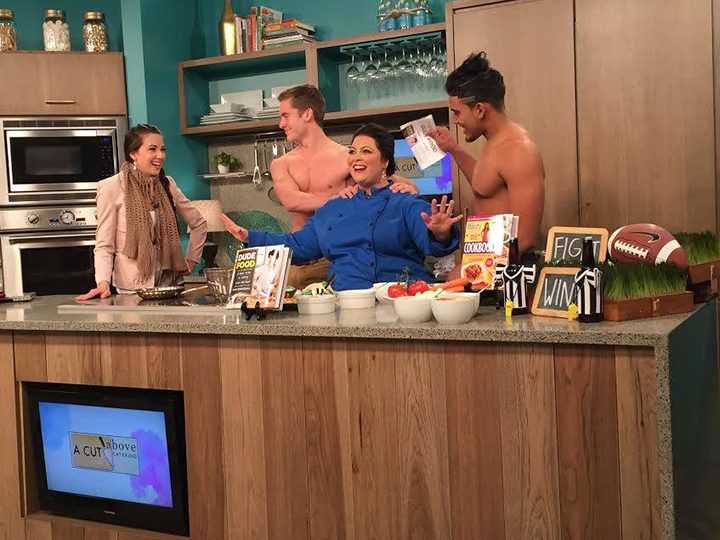 Amy von Eiff, center, during one of her televised cooking segments. (Submitted photo)

Amy von Eiff has built a reputation as one of the Indianapolis area’s most well-known caterers.

However, von Eiff said many people might not know that her business, A Cut Above Catering, 12955 Old Meridian St., Suite 104, Carmel, offers instructional cooking classes, public and private, as well.

“We want Carmel to know this is a secret gem for instructional cooking,” said von Eiff, who lives in Fishers.

The next scheduled public class is a sushi preparation class set for 6:30 p.m. July 22. Von Eiff said it’s the most requested class.

Twice a month, she appears on IndyStyle on WISH-8 and also appears regularly on Fox 59.

“That’s been great advertising for the cooking demonstrations and getting the A Cut Above Catering name out there,” she said.

Her husband, David von Eiff, a Carmel High School graduate, is a co-owner of the catering business.

The business will cater Lobster Palooza, hosted by Larry Bird and his wife Dinah, at Basile Opera Center July 16 for the second consecutive year.

It also catered the Andretti party the day before the Indianapolis 500.

“We get to feed all the stars that come through the Palladium. That’s a really big, fun thing,” von Eiff said. “Sophia Loren came in, and that was an honor for me as an Italian-American to make desserts for her. Because (the stars) have specific dietary needs and requests, the Palladium uses us because we’re very detailed oriented. Carmel is good to me because they love using local.”

A Cut Above Catering started in 2008 in a small 300-square-foot kitchen in Carmel before moving to its present spot two years ago.

“We have tripled our business every year,” von Eiff said. “We do a lot of charitable work as well along with the events we do. We have also catered more than 40 weddings this year.”

A possible expansion is in the works, using the space next to the business.

“We’re looking at an expansion, which would double our size,” said the 38-year-old von Eiff, who has two children, Bennett, 4, and Nina, 11.

The business also has a head chef, sous chef and full staff of bartenders and servers.