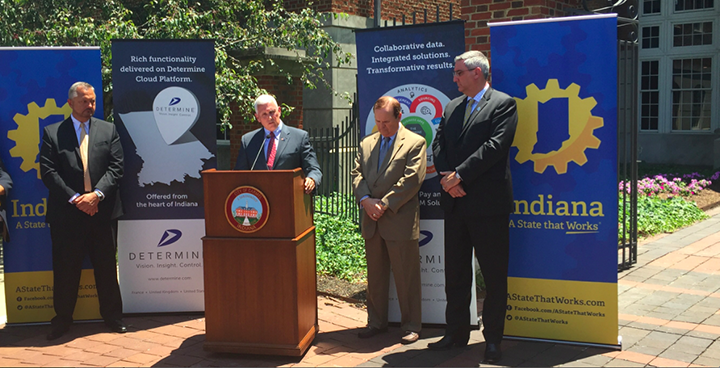 Indiana Gov. Mike Pence and Lt. Gov. Eric Holcomb were in Carmel on Monday, June 13 to announced that a publicly-traded tech firm would be relocating its headquarters from California to Carmel.

Determine Inc., a Silicon Valley company that specializes in cloud-based contract lifecycle management, will move its headquarters from San Mateo to existing office buildings at 615 W. Carmel Dr. The company is investing $720,191 to lease and equip the 9,000-square foot space. The company plans to add 24 high-paying jobs to the Carmel location by 2019.

The State of Indiana will offer Determine Inc. $400,000 in conditional tax credits but it wasn’t revealed if the City of Carmel is offering any other incentives for the relocation. Carmel Mayor Jim Brainard was unable to attend, but Camel City Council President Ron Carter spoke in his absence at the announcement.

“It’s a software company,” Carter said. “And that says to a lot of people, ‘You are a player.’ That’s very important to point to companies like these that have relocated from California because of our quality of life in Carmel.”

Pence referred to Indiana as the “Silicon Prairie” to compete with California’s Silicon Valley.

Patrick Stakenas, president and CEO of Determine Inc., spoke in Carmel about why they chose this spot to relocate to.

“It was a big decision to leave Silicon Valley,” he said. “But we believe that Carmel offers us a centralized strategic location for both staffing and maintaining connectivity to our global offices and customers.”

At the announcement, Indiana Gov. Mike Pence also took the time at the event to address the tragic mass shooting in Orlando.

“I say in the wake of Orlando, in the wake of San Bernadino, that if you see something, say something,” he said. “Communicate to law enforcement. We live in very dangerous times and this was an attack on the people of our country. I also wish to encourage to keep all the families of the victims and those that in the midst of recovery from grievous injuries and the members of the LGBT community in your thoughts and in your prayers in the hours and in the days to come. And lastly I do urge our national leaders to take renewed steps to confront radical Islam at its source. We must recognize that we are struggling with an ideology that has taken hold and darkened the hearts of even people in our own country and we must be prepared in renewed ways to confront it.”