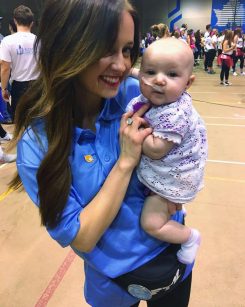 Richey, who will be an Indiana State University senior this fall, has helped transform the Riley Hospital fundraiser through her involvement. With Richey as president, the 2016 Dance Marathon smashed all previous years’ totals by raising $51,000.

“I knew what a wonderful place Riley Hospital was, but I didn’t totally grasp the significance,” said Richey, who was involved in planning the Dance Marathon at CHS. “It was definitely a highlight of my high school experience. As a senior, it clicked that this has an impact on me and my growth. I thought, ‘I have to have a marathon at ISU.’”

A small dance marathon started at ISU in 2010.

“It was a developing one to say the least,” Richey said. “I immediately became involved. I had a vision for it, but I didn’t really have the freedom to execute what I wanted to do.”

Richey served as morale chairman as a freshman.

“It became evident it wasn’t reaching its full potential,” Richey said. “Being at Carmel gave me that vision of what a marathon can be.”

“So that was a tremendous amount of growth, but I knew it still wasn’t where I thought it could be,” she said.

She became president as a junior.

“Immediately from the get-go, I wanted to make sure to do everything we could to bring it to our fullest potential,” Richey said.

“We recruited like crazy and grew from 15 members to 85 members,” Richey said. Richey rebranded the Indiana State University Dance Marathon to State Dance Marathon to increase the Terre Haute community’s knowledge of the event’s mission.

They ended up doubling their initial goal. Richey earned the Junior Leadership Award and a summer internship in the marketing and communications department at Riley Hospital.

Richey will serve as director of alumni relations for the 2017 State Dance Marathon.