You are at:Home»Current in Carmel»Carmel Community»Traffic light planned to ease congestion at 136th Street and Keystone Parkway roundabout 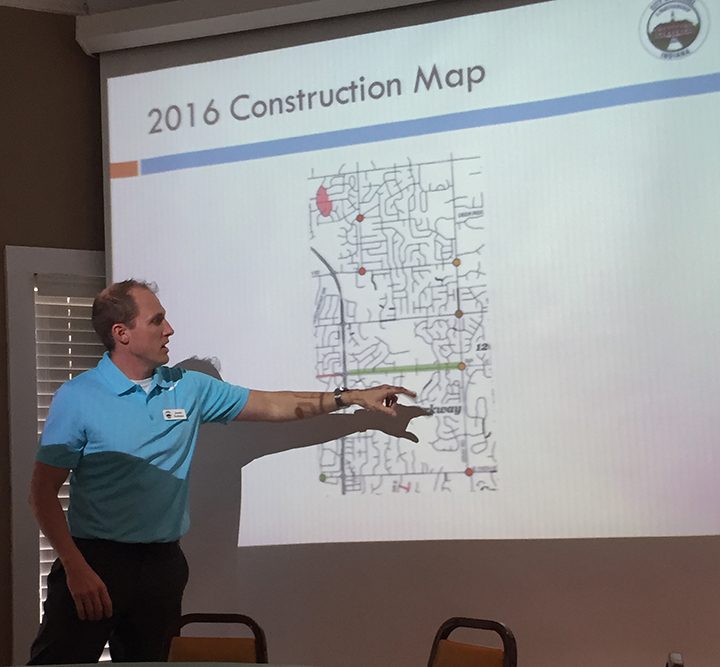 Jeremy Kashman, city engineer, presents the plans over the next couple years for the northeast part of Carmel. (Photo by Anna Skinner)

Several Carmel roads are expected to receive upgrades in 2016 and 2017, including one that will receive a traffic light to reduce rush hour backups at a roundabout. Officials presented the projects to northeast Carmel residents at an April 20 meeting at the Brookshire Club House.

City engineer Jeremy Kashman detailed plans to alleviate traffic on 136th Street in the morning and Keystone Parkway in the afternoon by installing traffic lights at the existing roundabout.

“In this instance we will put in stoplights, metering the northbound Keystone off-ramp to stop that traffic, with allows the traffic heading westbound to move through the roundabout,” Kashman said. “It’s about a 70 percent reduction in the morning. In the evening, we will be stopping traffic on the west side of 136th Street to allow northbound ramp drivers to exit.”

Kashman also presented plans to widen Hazel Dell Parkway by eliminating the grass and tree lines in the median. He also said roundabouts will be constructed on Carey Road at 136th Street and Hawthorne Drive. This year’s projects should begin in the fall, after U.S. 31 construction has been completed in June or July.

Residents in attendance expressed concern over the foot traffic near Hawthorne Drive and Carey Road because of a toddler park close to the area. Mayor Jim Brainard countered the concerns with reassurances that roundabouts decrease traffic accidents.

“Roundabouts reduce pedestrian accidents tremendously,” he said. “People can run stop signs but with a roundabout, people have got to slow down.”