You are at:Home»Current in Carmel»Carmel Community»Keith Smith, former fire chief in Carmel, Westfield and Indianapolis, dies after battle with cancer

Keith Smith, retired chief of the Carmel Fire Dept., died May 2 at age 72 after a battle with breast cancer. 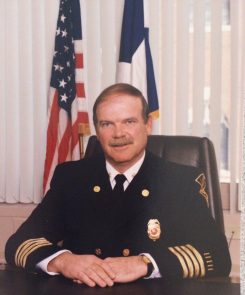 Smith also had some health problems caused by smoke inhalation from years of working as a firefighter, many before modern advances in firefighter equipment.

“He got behind and never could get caught up,” said David Haboush, current chief of the Carmel Fire Dept.

Smith had nearly five decades of firefighter service in his career. He was CFD chief from 2006 to 2012 and prior to that he was fire chief in Westfield for four years and fire chief in Indianapolis from 1992 to 2000.

He began his career in 1965 at the Indianapolis Fire Dept. before eventually holding the positions of lieutenant, captain, division chief/shift commander and assistant fire chief while in service to Indianapolis. He was also chosen by the City of Indianapolis to be a full-time staff member at the 2001 World Police and Fire Games Office.

Smith was known for saving lives during the Athletic Club fire in Indianapolis on Feb. 5, 1992.

“In the sequence of events that night, what could go wrong, did go wrong,” Smith told Indianapolis Monthly about the fire in 2012.

Smith was serving as interim fire chief at the time and was told he wouldn’t be getting the permanent position. Many say his decisive actions that night helped prevent a tragedy from being even worse and credited him with making changes to IFD policy following the fire to prevent future incidents. He was given the permanent job as chief.

“Please keep his wife, Cindy, and family in your prayers,” a statement from IFD read.

A viewing will be held for Smith from 4 to 8 p.m. May 6 at Crown Hill cemetary, 700 W. 38th St., Indianapolis. The funeral will begin at 11 a.m. May 7 with one hour viewing prior to services. Smith will be buried at Crown Hill cemetery in the Heroes of Public Safety section.