You are at:Home»Current in Carmel»Carmel Community»Woodbrook’s Janet Vahle named Carmel Clay Schools Teacher of the Year 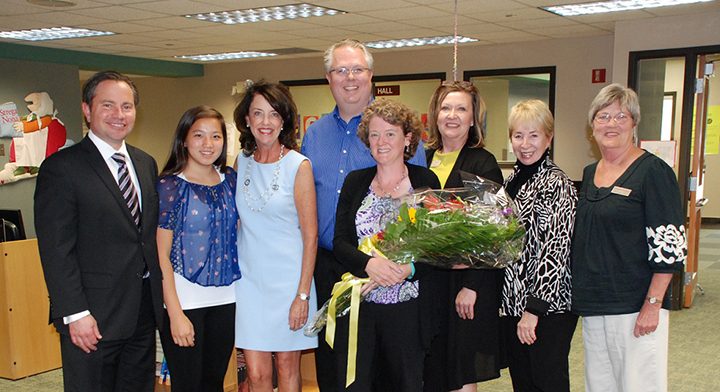 Woodbrook Elementary teacher Janet Vahle has been named the 2016 Stephen A. Backer Teacher of the Year for Carmel Clay Schools. Vahle is a 2/3 high ability teacher.

CCS Supt. Dr. Nicholas D. Wahl; Susan Backer, wife of late School Board President Stephen A. Backer; members of the CCS administration; and Vahle’s family surprised Vahle and her colleagues by making the announcement at her school on April 25.

Nominations for Vahle shared recurring themes that describe her as an educator who “is attentive to her students’ unique learning styles,” “stimulates a love of learning,” “keeps students engaged and challenged while they learn” and “is always researching new tools to help her students learn.” Vahle will now represent CCS in the Indiana Teacher of the Year competition.

“Janet exemplifies Carmel Clay Schools’ vision to Experience Excellence, Explore Opportunities and Realize Potential in every student. She is a thoughtful, caring educator who challenges her students to grow and excel, while still being attentive to each child’s social and emotional needs,” Wahl stated.

Vahle received her bachelor’s degree in elementary education, with a gifted endorsement, from the University of Indianapolis. Vahle was hired by CCS in 1999. In addition to her current position, Vahle is an elementary lead teacher and technology coordinator.