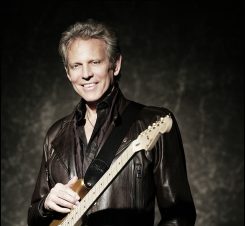 Long before Don Felder joined the Eagles, he seemed destined for great things.

After all while still in high school, he played in a band called The Continentals with Stephen Stills in Gainesville. Stills, of course, went on to become part of Crosby, Stills & Nash. Felder gave a younger Tom Petty guitar lessons and he rubbed shoulders with the Allman brothers. Another Florida friend from those days was Bernie Leadon, a founding member of the Eagles.

Felder said there are some areas such as Detroit in the Motown era and Seattle in the grunge area that breed success.

“It’s that shared creativity, shared competition and challenging each other to improve,” said Felder, who will perform at Hoosier Park’s Terrace Showroom at 9 p.m May 21. “There are certain areas where things happened magically. I don’t know why. Maybe there was something in the water we were drinking or something we were all smoking.”

“Duane (Allman) was always the best guitar player when I was growing up,” Felder said. “I stole just about everything I have on slide guitar, from watching him, him teaching me and hanging out together.”

In his current tour, Felder plays mostly Eagles songs and some solo pieces.

“I have an unbelievable band,” Felder said. “They’re all high-seasoned, high-profile professional musicians. It’s delightful to play with these guys.”

Felder typically does between 75 and 80 shows a year.

“I know people that go out and do 150 shows a year and just live on the road,” he said. “We did that with the Eagles during the ‘70s and again during the Hell Freezes Over tour.

Touring too much makes it difficult to spend any time with family and friends.

“I need to have a real balance between my professional and personal life,” he said. “If I’m not playing enough, there is something missing in me. I need to be playing music. If I’m playing music too time and I’m missing the other part of my life, there something wrong with that. When I sit down with my booking agent and manager, I tell them I’ll only play two weeks out of every month. I need half of it for professional and half of it for personal.”

Felder’s daughter Leah and and her husband Brandon Jenner, whose father is Bruce (now Caityln), form a duo Brandon and Leah. Felder said he gave his daughter advice when she was reluctant to be on “Keeping up with the Kardashians.”

“She said, ‘I don’t want to be known as a reality star. I want to be known as what I do as a singer, a writer and a performer,’” Felder said. “I gave her advice when they got their album together to at least to have Kardashians episode film their release party. The next week when Kim and the girls started tweeting about the Leaalbum, it went to No. 3 on iTunes downloads in one week because they had 10 million viewers a week on that show. It helped launch their career.”

While Leah still confers with her dad on his music advice, he said she really doesn’t need it.

“She still looks to me for guidance but I think at this point she has everything she needs to have,” Felder said. “She needs me to put my arm around her and give her the confidence she can do it and off she goes.”