You are at:Home»Current in Carmel»Carmel Cover Stories»Paralympic champion to visit Carmel Marathon weekend 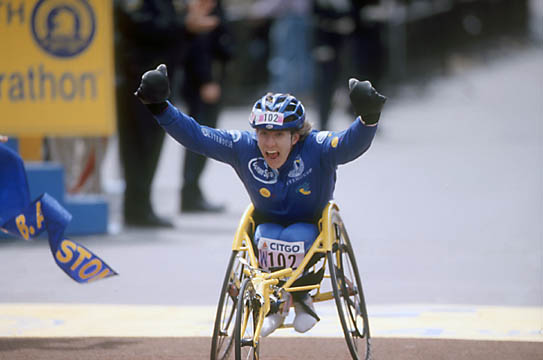 Jean Driscoll crosses the finish line at the Boston Marathon in 2000. (Photo by Boston Athletic Association)

Jean Driscoll was born with spina bifida. The Milwaukee native said her brown leg braces used to draw plenty of stares. She was teased a lot. Fell down a lot. And when her siblings played sports, she was often forced to watch.

“I never got to get in there and get dirty because my legs weren’t strong enough,” she said. 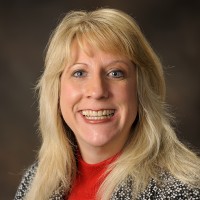 She was itching to get involved, so she’d even challenge people to crawling competitions. She said she was frustrated, disappointed and sad that she couldn’t move around like everyone else. Sometimes her siblings even forgot to pull her home in the wagon.

But years later Driscoll found a way to get into the game herself through wheelchair soccer in high school.

“I was reluctant at first,” she said. “But then I saw people crashing around and though, ‘Hey, this is a real sport. I think I’ll like this.’”

She moved into wheelchair racing, and she competed in the Paralympic Games from 1988 to 2000, winning five gold medals. She’s won the Boston Marathon eight times in her division — more wins than anyone else in any division. She’s ventured out with a jogging President Bill Clinton several times.

Driscoll, now 50, will travel to Indiana for the Carmel Marathon to be the celebrity race starter for April 16’s festivities.

Driscoll will speak on April 16 at an afternoon meet-and-greet for the public and special invitation-only VIP event. Both events will be held at the Indiana Spine Group at 13225 N. Meridian Street. The public event will be at 3 p.m. and is limited to the first 100 registered attendees. The event is free, but the Hamilton Community Tennis Association will accept donations, which help fund wheelchair racers.

Driscoll, who now works at the University of Illinois, is no stranger to Hamilton County. She lived in Noblesville for about a year and a half about 10 years ago. She’s been back to visit for work trips and said she’s amazed at the growth of Carmel.

Driscoll retired from racing in 2000, but she still travels to give inspirational speeches around the country.

Despite her achievements, Driscoll contends she’s just like anyone else.

“I don’t really think about my disability,” she said.

During her racing days, Driscoll would race 120 to 150 miles a week and lift weights three to five times a week. She could bench press 210 pounds with a body weight of 112 pounds at only five feet tall.

She’ll meet with someone who is amazed at her training schedule who says, “Wow, I couldn’t do that.” She believes anyone can.

“I have to laugh to myself because if you haven’t trained to do that you won’t be able to do that,” she said. “I was training six days a week for long hours. A lot of work goes into it.”

Driscoll said that’s the important message, that hard work and faith — in yourself or a higher power — can push someone to accomplish amazing things.

“I had the fire inside of me, but I think everyone can do this, too,” she said. “You just have to put in the work.”