You are at:Home»Current in Carmel»Carmel Community»Wolfe siblings to pay tribute to late brother at Carmel High School Dance Marathon 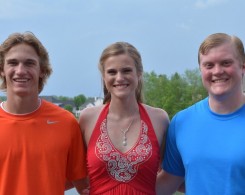 There are typically few dry eyes during Carmel High School’s Dance Marathon as many in the student body bond together to help kids in need.

This year’s version, set to begin at 4 p.m. Feb. 27, will be especially emotional for Samantha and Matthew Wolfe, who as CHS cabinet members have been active in the planning of the Dance Marathon and fundraisers leading up to it. Their older brother, Nicholas, an Indiana University sophomore who died from injuries suffered in an accident in September, was active in both Carmel and Indiana University Dance Marathon. Nicholas, who wanted to be a doctor, was the IUDM representative for his fraternity, Phi Delta Epsilon, a co-ed medical fraternity. The dance marathons benefits Riley Hospital for Children.

“Dance Marathon meant a lot to us before, but after everything that happened, it took on a new meaning,” Samantha said. “It was not just helping kids, but it was trying to carry on his legacy.”

Samantha, a senior, and Matthew, a sophomore, are selling $15 T-shirts, which pay tribute to their brother to help raise money for Dance Marathon. The Nicholas Wolfe Memorial T-shirt include Nicholas’ favorite uniform number 44 with the words, “Never forget on a number,” along with his initials, “NLW – We believe in Angels,” on the front of the shirt.

“It’s been amazing to see how much the community cares and has come together to support us,” Samantha said.

Samantha isn’t sure if she will give a speech at Dance Marathon.

“I may say it’s special this year. I’m dancing for my brother,” she said.

Wolff said she has been impressed “to see their journey through extreme tragedy and incredible grief to turn it around and try to make a testimonial to his life. To pay it forward and to do it in his memory, I think that’s something as a teenager that is hard to do. It would be easy to give it up. They’ve used it to drive harder for the memory of their brother and the things that he loved. I’m sure it’s going to be emotional for them, because they have put so much emotion into paying homage to their brother.”

Like his late brother, Matthew plays football. Samantha is a trainer for the football team and a diver on the swimming team.

Matthew said after his brother’s death, it was the Cabinet and the football team that provided support.

“They were what got me through the hard times,” Matthew said. “I was spending a lot of time with the team and a lot of my good friends were there. Kids my age knew Nicholas from coming to my games and the older teammates knew him, so I had two inputs on helping me get over the situation.”