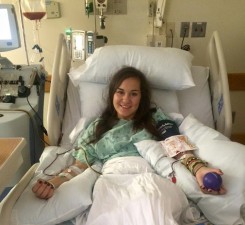 After a moving presentation by Be a Match to her Ball State University sorority, Alayna Troha decided she should try to make a difference.

The 2014 Westfield High School graduate signed up for the organization, which used a cheek swab to match her to a patient that needed a bone marrow transplant.

A month after the cheek swab, Troha got the email that said she may be a possible match and needed more testing done, like blood work. After months, she finally heard that she was matched with a 59-year-old patient with myelodysplastic syndrome. Last month, she donated her bone marrow.

“My parents had to feed me and stuff,” she laughed. “But I would for sure do it again. If I got matched again, which would just be insane, I would definitely go through it again.”

There is a one in 540 chance to match with a patient who needs a bone marrow transplant.

“It’s kind of funny, but I absolutely hated needles and now ive gone through tons of bloodwork and needles and shots and everyone thought it was funny because I was such a wuss, but it’s just so worth it,” the 19-year-old said. “I don’t want people to think they can’t do it because they’re afraid of it. Since you’re saving somebody’s life the little amount of pain is such a small factor.”

Contact between the patient and Troha will be opened a year from the date the procedure took place in case either of them wants to contact the other.